A few more pieces of terrain for Normandy, this time some corners for Bocage hedgerows. 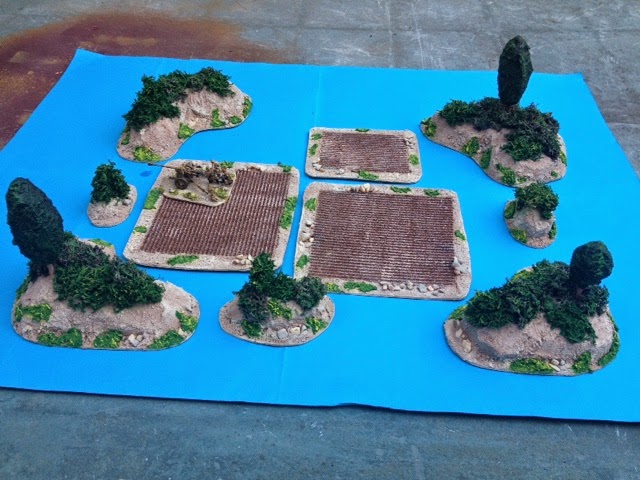 Also made are some fields, everything glued to those floor tiles I mentioned in the last two posts.

On the left side of picture you have a 50mm PAK just for scale. 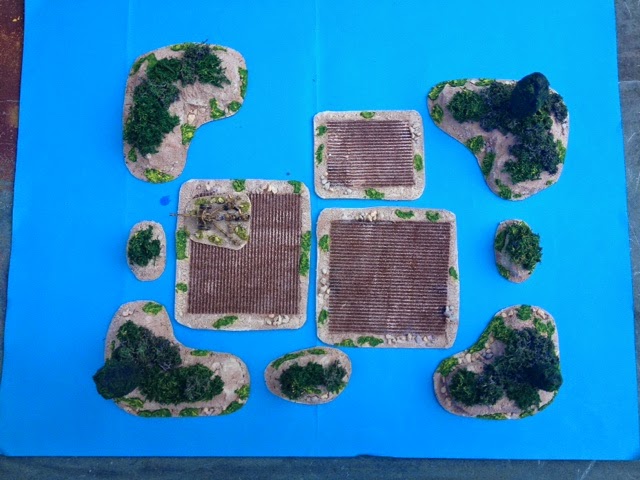 The construction method can be seen in the Bocage tutorial of two posts ago. Nothing new just my will to have a Normandy landscape filled with green bocage. 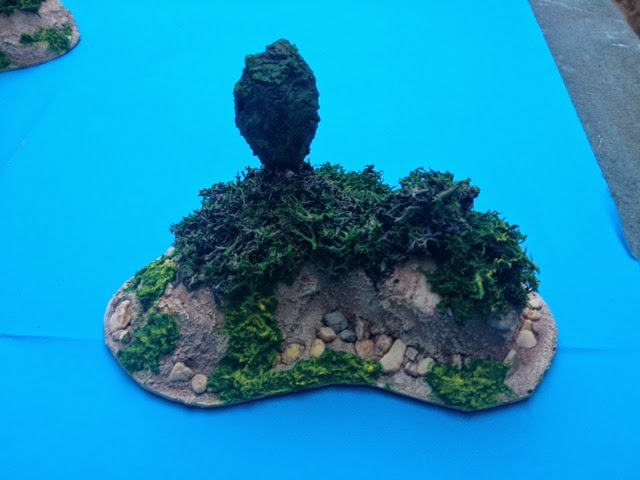 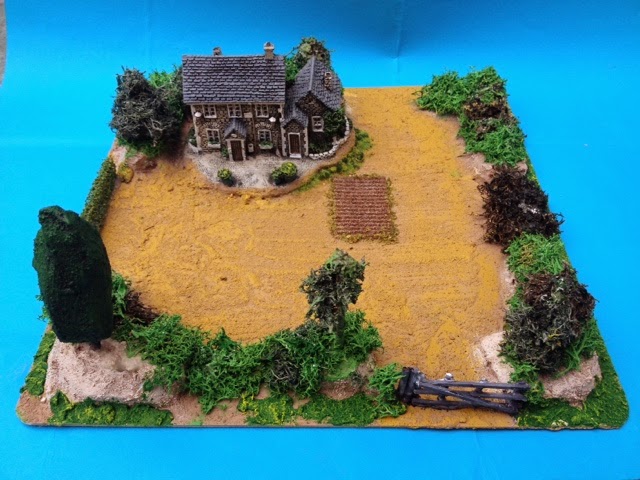 And now for the finished Bocage boxes.
The hedgerows themselves are made in the following way: pick some moss from the local woods... Ok, ok you have no woods nearby, then buy some cheap bags of Iceland moss that are sold around Christmas; then chop the moss with a pair of scissors or knife into small bits; mix them with green paint and PVA glue and apply them generously over the mounds. Don't make them too high as you will need your models to fire from the inside, at least in some places. 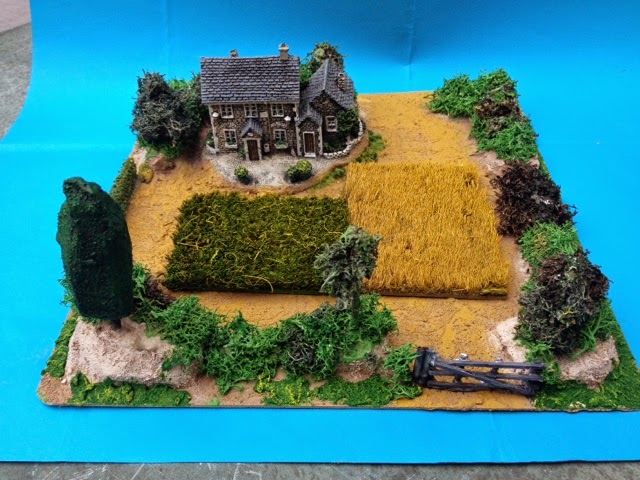 This is were you can use the pieces of carpet: directly inside the bocage box or outside if you prefer.

The house is a Chinese resin one, of a kind no longer seen. Fortunately some 15 years ago there were plenty and very cheap so I made a good stock. That will be another article. 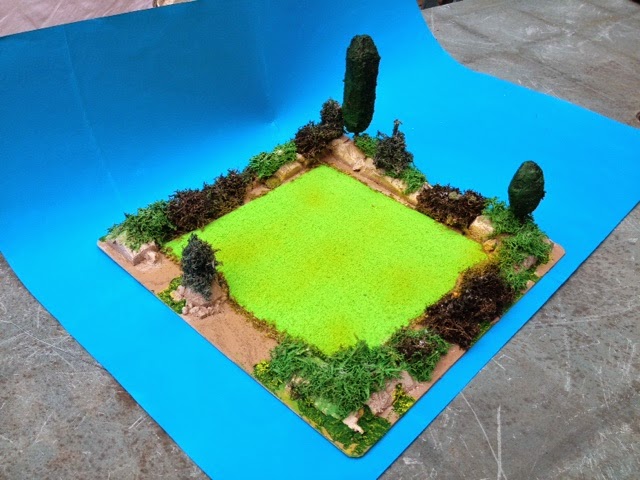 Again the same principle. Without... 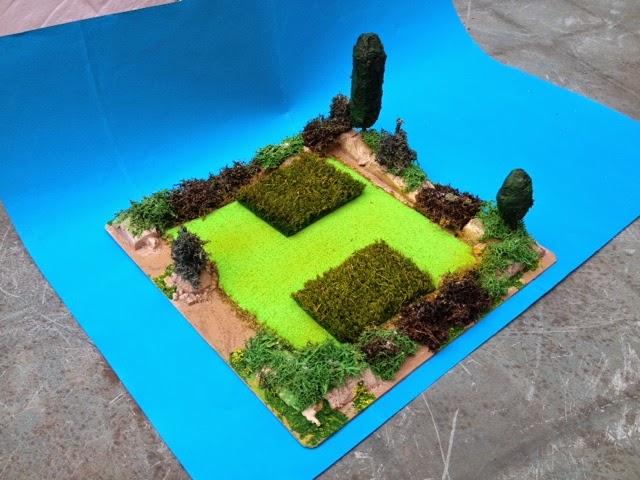 ... and with carpet fields. 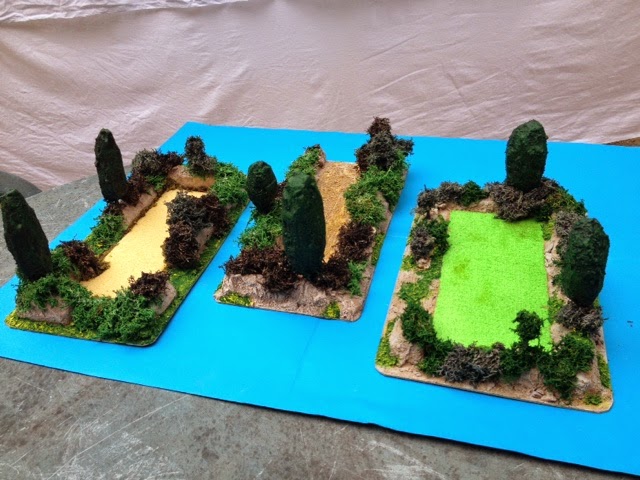 These ones are half-tiles but with the same kind of construction. 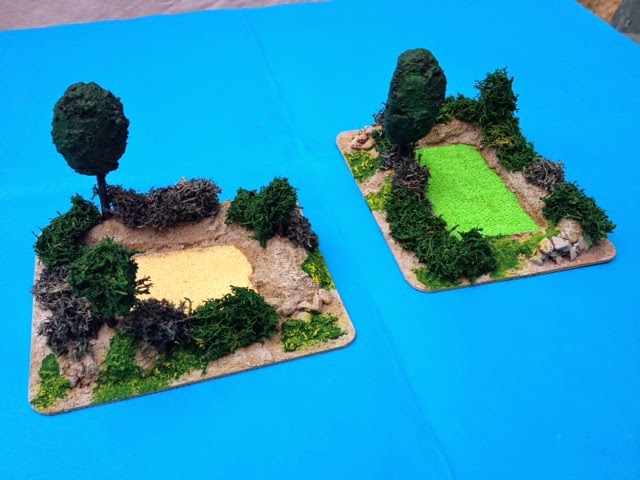 These ones are one-quarter tiles. 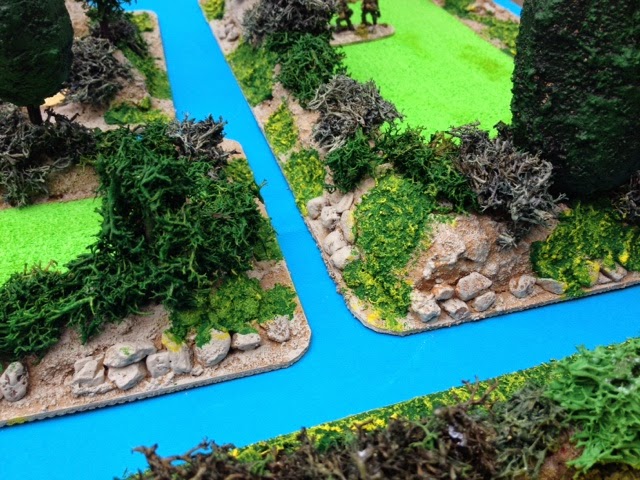 All of the Bocage boxes have a balance bettween the earth of the mound being shown, small pebbles and some grass made of acrylic, PVA glue and sand.

Let's see how they look in action... 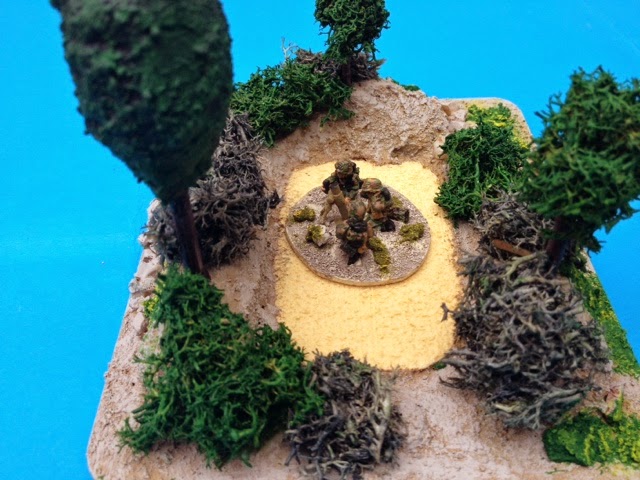 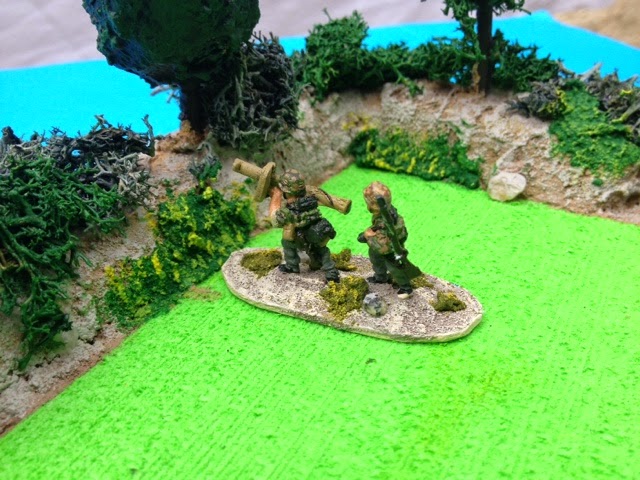 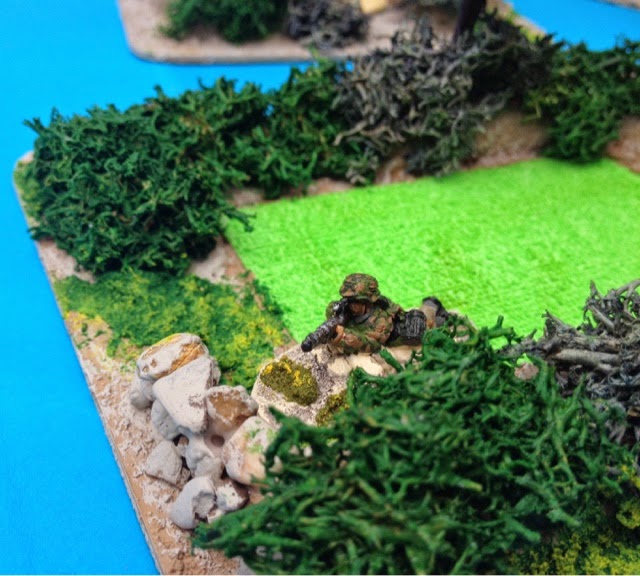 Sniper at the gates...Sorry, I think I'm watching too many movies. 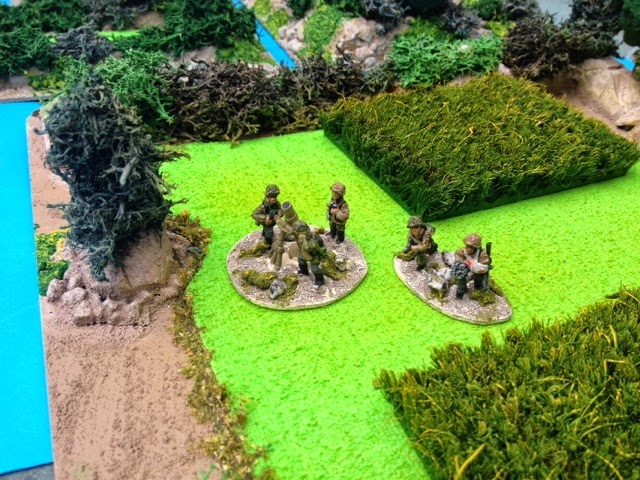 Leave plenty of space inside the boxes as there must be enough room even for armour to manoeuvre. 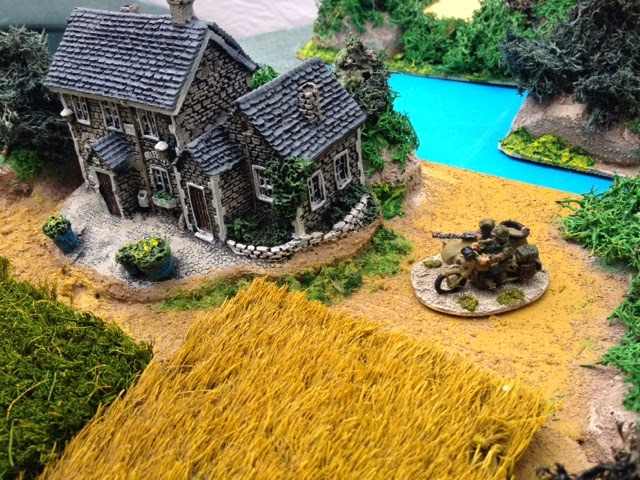 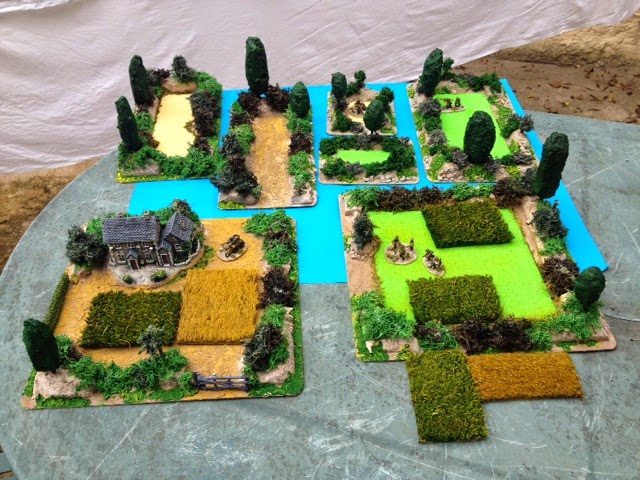 The lot. Seven boxes of Bocage and some fields to scatter around. I already have add-on Bocage but the old ones, built approximately in the same way, are in strips and not in boxes. The old ones are more pratical for wargaming but these ones are visually more appealing.

I'll show you the ones in strips next time.

What do you think about the way to make bocage? What is your style?
Posted by João Pedro Peixoto at 09:22 4 comments:

When someone is not fit or talented enough for a job we say here " go fishing" or "embrace agriculture". Well I decided exactly on  the second one.

So for the latest days I've been making hedgerows and agriculture fields for the Normandy campaign.

Here they go and this time the text will have little reference to miniature brands but only to Christmas, shoes, Chinese shops and other rather strange stuff...

The idea was to use some 30cmx30cm plastic and textile floor tiles I found under the varanda from some 20 years ago works and build "Bocage boxes". 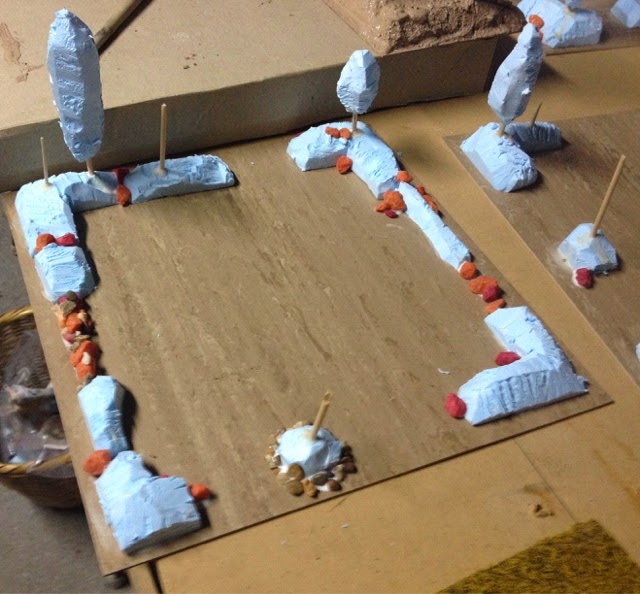 Then glue some carved pieces of styrofoam/blue board with wood glue to the tiles. Trees were also made from blue board and attached to the "raised mounds of earth" with pieces of barbecue sticks. 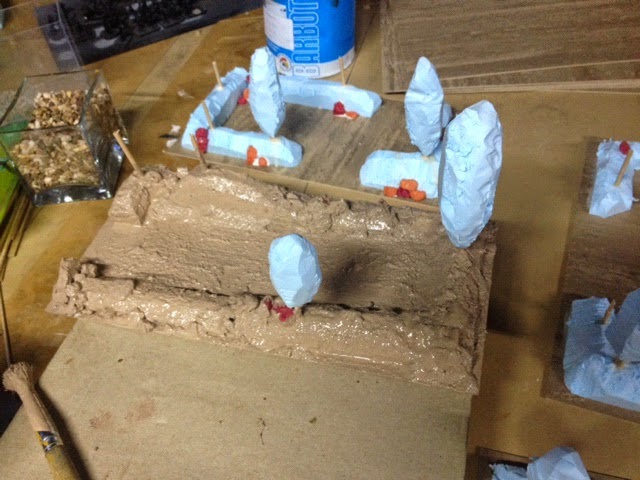 Then the whole tile is painted with acrylics mixed with PVA glue and sand. 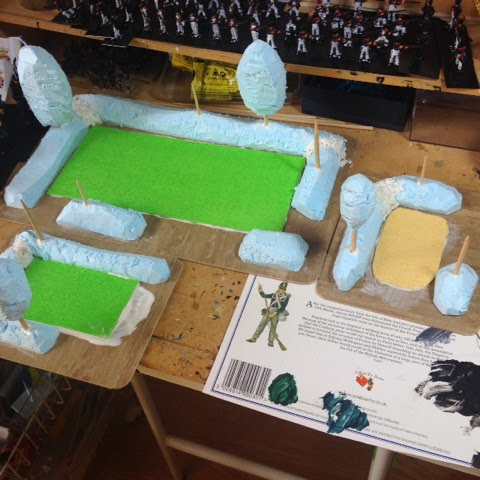 To others I applied the inner field inside the Bocage - pieces of green or sand yellow thin carpets bought on a chinese shop- first to the tile before painted. I ended by preferring this last method.

Some cocktail sticks gets no tree as they will receive plenty of bush to make the pieces more varied. 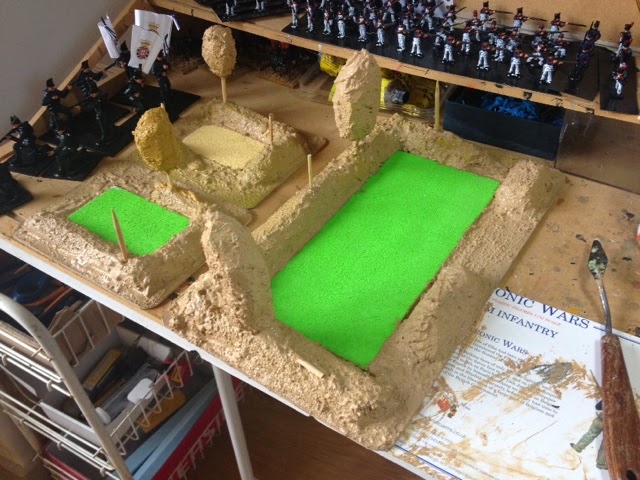 See? It looks more ... professional. Or then it's just the picture that got better. 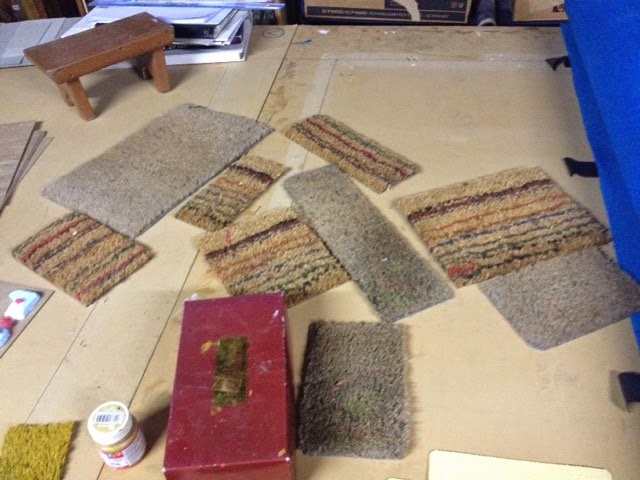 Many shoes were already cleaned on these carpets. The advantage is that the carpet gets lower than a new one.
Besides after cutting the pieces you quickly spray greens and yellows to your discretion avoiding the spread of Ebola. 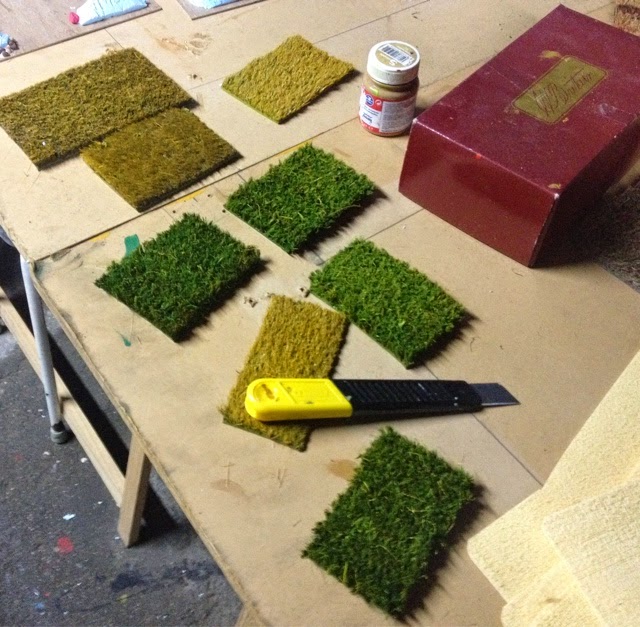 Here they are all shiny and new. 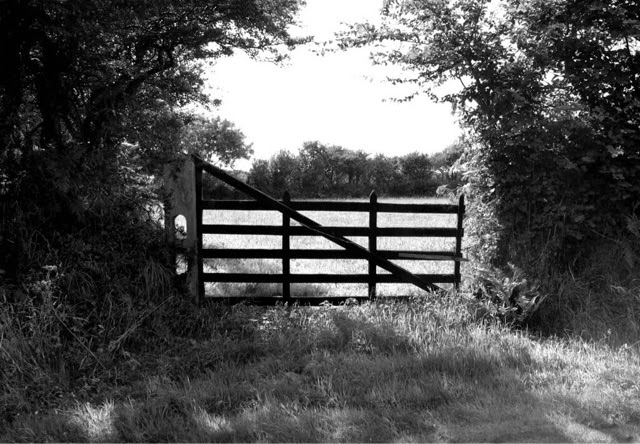 The internet is invaluable for this task as if you are not close enough to Normandy you can find hundreds of nice photos were you can get inspired.

Next: the finished Bocage.
Posted by João Pedro Peixoto at 05:24 No comments: