Rapid Fire! The beginning of the Panzerwaffe in 20mm - The NbFz A (or V if you prefer) 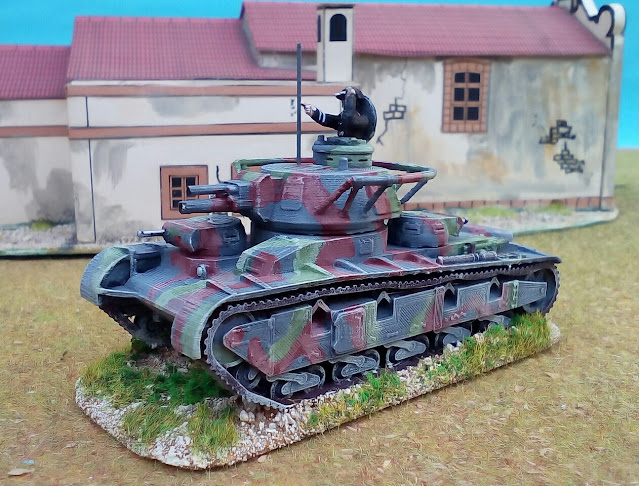 The Neubaufahrzeug A, with Rheinmetall turret, was a mild steel "Propaganda" tank that obviously could not have a real fight by WW2 standards. It spend a good part of its life at the German training ground of Putlos but, as always with these German less known weapons, a big number of speculations  (truths?) are easily available. In one of them, one of the two NbFz A made may have been sent to Norway to replace one destroyed by a British operated 25mm Hotchkiss AT gun (or were they Boys AT rifles?...I´m getting confused...). Another story places the mild steel versions in Berlin in 1945 when all available sticks and stones were used to its defence while other accounts say they were scrapped in 1942. Well, you have stories for all tastes like it happens with the three other more active brothers with Krupp turrets. 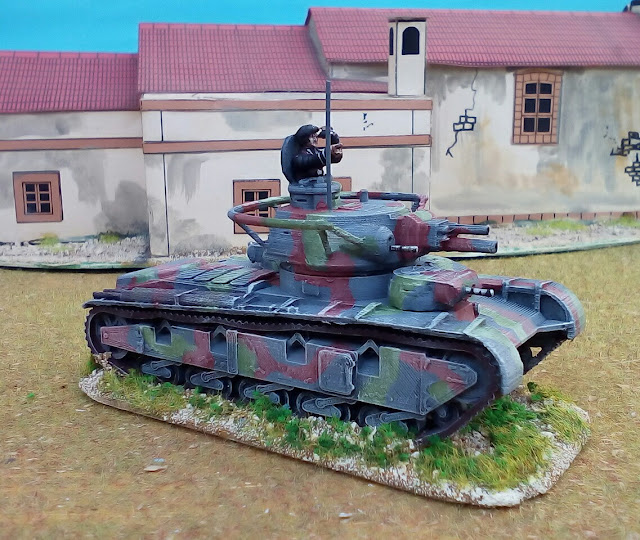 The fact is that this tank is one of the most elegant and powerfully looking (even if not) AFV's of WW2. The model is a MiniGeneral 3d print and ,as you can see, the printing lines are barely recognizable, showing that this technology and in particular this brand is getting better and better. The camouflage is one that the Germans used before the war with a lighter tone of the Panzer Grey (Vallejo Basalt grey here), a medium green and the more usual brown.
The figure is the tanker from Fujimi with a GreenStuff large bonnet. The opening in the turret is the large round one but it could be open in two halves as there are photos of both of them being used in this NbFz.
Next: more 21st PD in Normandy.
Posted by João Pedro Peixoto at 07:32 2 comments:

Rapid Fire! France 1940 in 20mm - More wheels and tracks for the German side 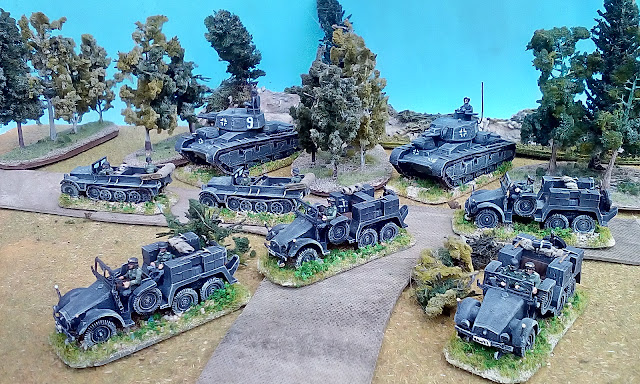 At the crossroads of Karl-Heinz-Rumenigge, still in German soil, a column of towing vehicle prepares to give a ride to its guns. Lurking in the woods the Neubaufahrzeug of Pz.Abt,zbv 40 prepares its engines to join the column. 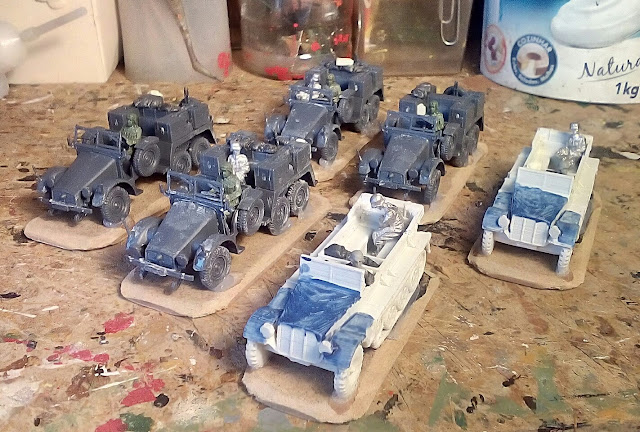 The Kfz 69 are FtF  and the Sdkfz 10 are BPM 3d prints. Both will pull the 37mm Pak, 20mm AA and 75mm IG of several units. The BPM models need some sort of paste in the areas were the printing lines are more visible. Besides the original BPM figures I added a few S&S figures in their relaxed poses to this lot. 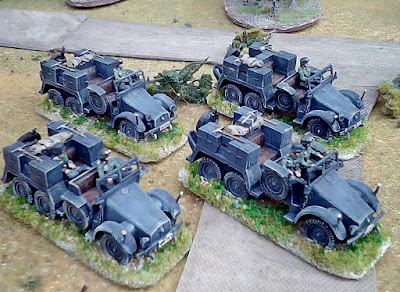 The FtF kits are little marvels of enginneering with lots of detail and very easy to put together. 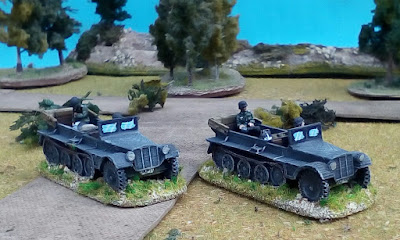 And what to say about this BPM model? One piece and its done. 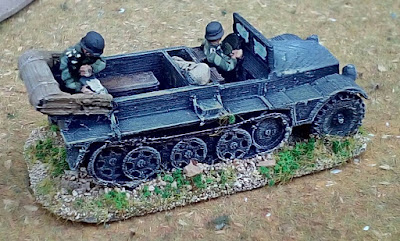 The S&S passengers are very nice. This one is looking at his wrist watch and holds a map or at least I think thats what he does. The driver is my usual plastic torso with GreenStuff arms. 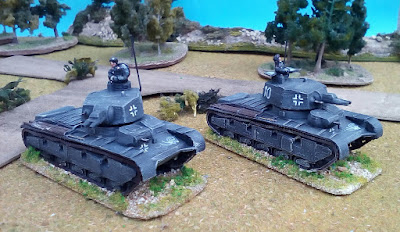 The Neubaufahrzeug are Minigeneral 3d prints with Fujimi tankers with Greenstuffed bonnet. I painted them in plain Panzer grey as the rest of the lot hoping they can one day reach the plains of Ukraine in 1941. In fact the few Neubaufahrzeug B, after its usage in Norway 1940, were sent to Russia and lost there against BT-7s. 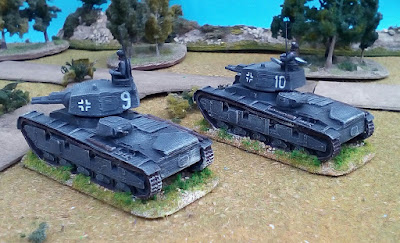 As can be seen here they almost participated in the French campaign but became disheartened at the sight of the Char B1bis and fled to Germany behind their 20mm armour plates... After all they were Propaganda tanks.
Next: a few more models for the 21st PD in Normandy.
Posted by João Pedro Peixoto at 14:54 6 comments:

Rapid Fire! Market Garden in 20mm - Oddities and such (part 11) - More German wheels and guns for the new RF book 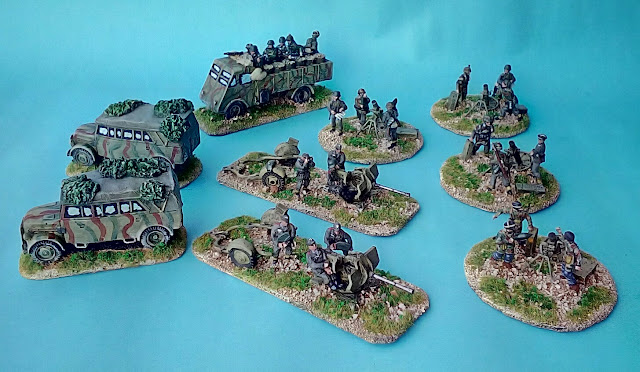 This week's finished items for OMG: On top, a Renault AHN will be used to complete Graebner's unit, on the left, a few more 20mm Flak 38, this time towed by Steyer heavy cars and on the right several 120mm mortars to equip both Heer and FJ. 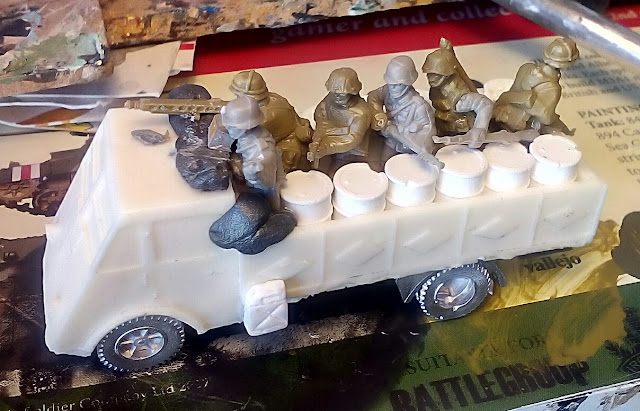 The Renault AHN is S&S and the figures came from both Valiant German boxes. Unfortunately only one of these Renaults was on the bridge on the 18th September 1944 and thus no more than one can be modelled. 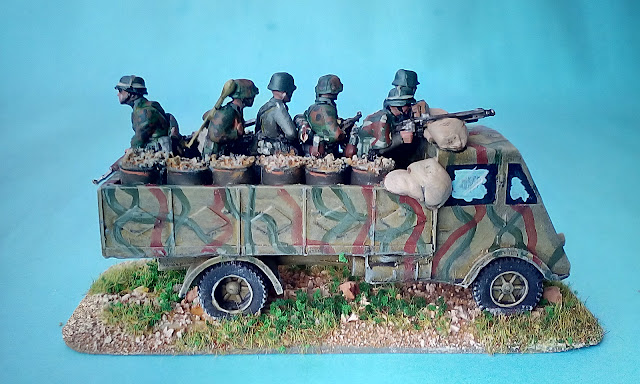 The uniforms were painted with a mixture of SS and Heer uniforms due to the volunteers that crewed this vehicle and other Ford and Opel LKW and PKW of Graebner's column. 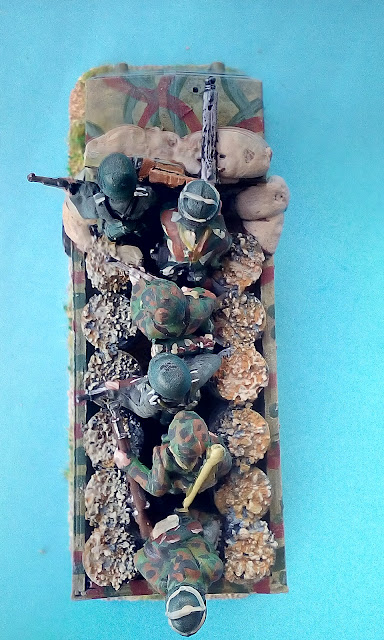 The MG42 firer originally had a MG15 but the beauties of hard modelling allows you to interchange many parts. The oil drums are clay cast pieces kindly sent to me by Reprimo Wargaming. 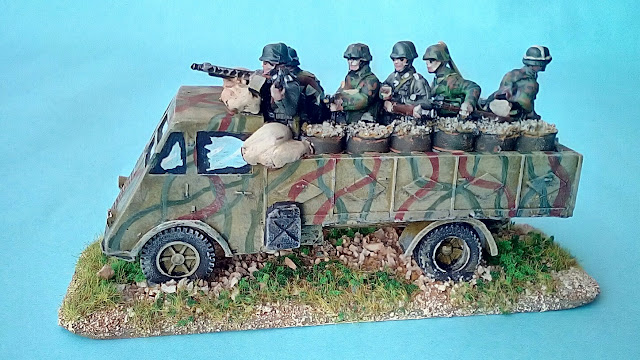 Maybe I will build another truck with oil drums based on the trucks of the previous post (they are a reasonable match for the Fords used by the Germans) in order to have one that represents the eight or so Opel and Ford LKWs that tried to cross the bridge. They are fun to make and the variety of poses provided by Valiant is an appetizer for this extra model. The grassy base will be an eternal problem as the Arnhem bridge had very little of it... 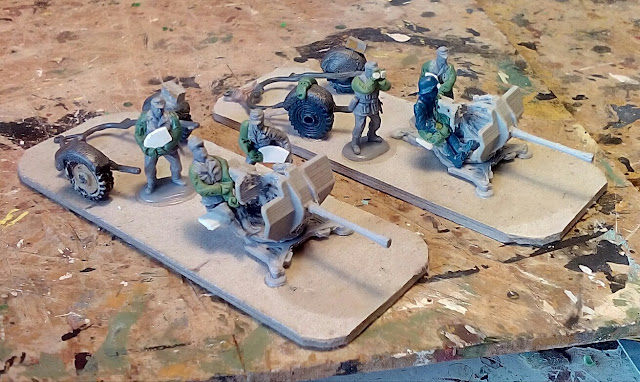 A very different story with these Flak 38. The guns are Minigeneral and most of the crew figures are Revell engineers with new arms. The Sd.Ah.52 tailers are old Esci that came with the 20mm FlakVierling. They were leftovers as I used the gun tubes for something else. New wheels and mudguards had to be added. 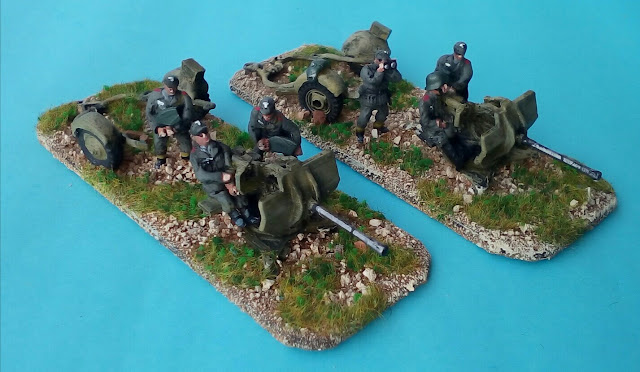 Some cases of 20mm ammo were placed on the new arms of the Revell figures as well as a new pair of binoculars in one of them. 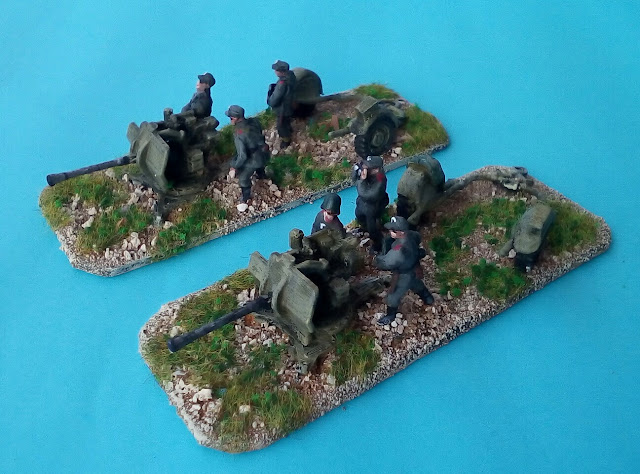 The stand gets a bit to long with gun and trailer but I think it results in an different and lively piece. 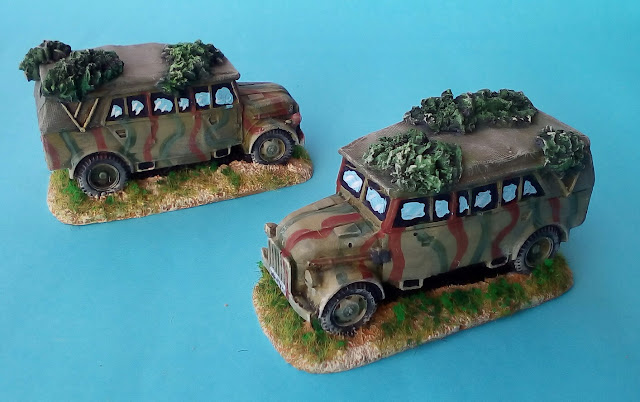 Two Steyers to pull the Flak 38s from  Raventhorpe RTR range were built straight from the box, that is, painted! Only some foliage made of  two component paste was added. 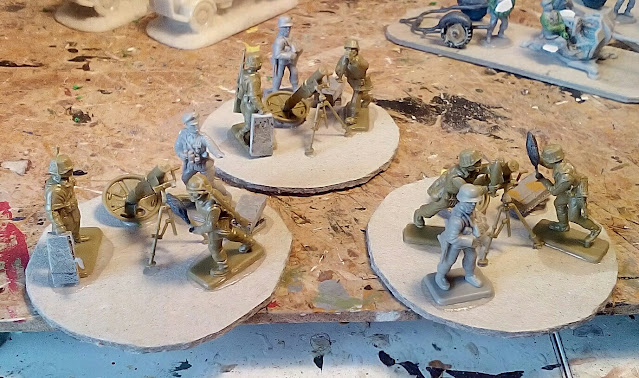 Also some badly needed 120mm mortars with Heer crew joined the German shelves. I already have some for the SS and LW infantry but none for the Heer. The crews are Valiant and a few more mortar shells were made of two component paste and placed in rifle armed figures. The shell cases were made of 3mm thick styrene. 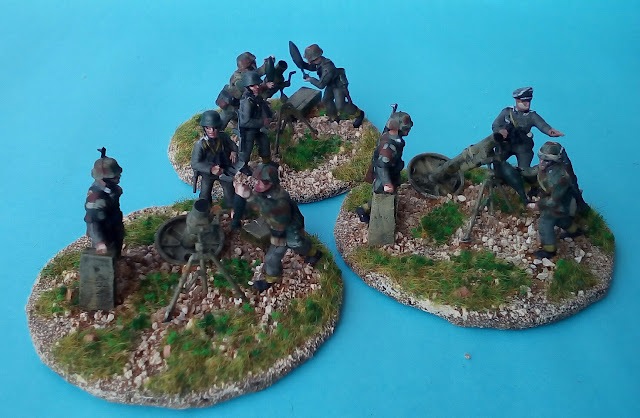 I tried to stick the models into my usual 4cm poker bases but some new 6cm bases had to be cut due to the size of the Valiant figures, true servers of the Nazi doctrine of racial superiority!! Even if big, they are lovely figures that allows a huge variety of poses and conversions. 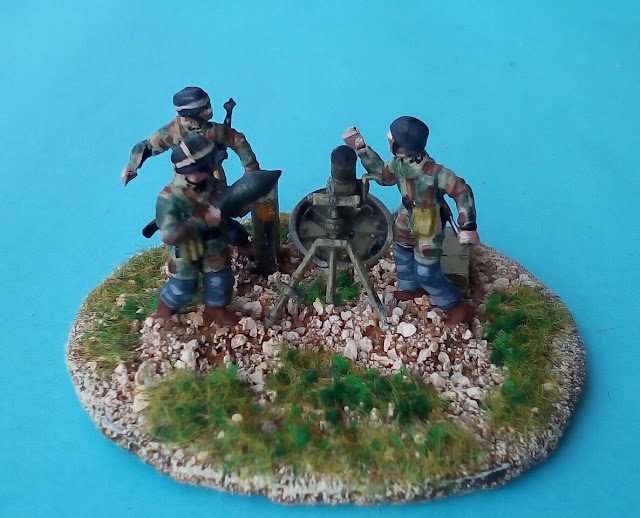 Finally one stand of FJ 120mm mortar was made with the Valiant weapon and converted Esci German paratroopers.
Next: maybe a dive into France 1940 or more OMG. A return to Zululand is also in the horizon...
Posted by João Pedro Peixoto at 13:35 6 comments:

Rapid Fire! Market Garden in 20mm - Oddities and such (part 10) - A few Allied missing bits for the new RF book 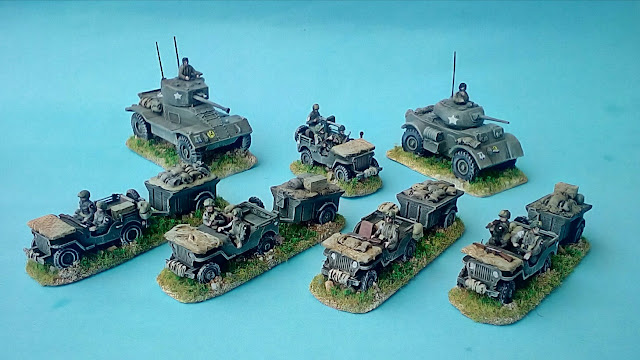 This week a few more new models were added to the Allied side. The Armoured Cars and trailers came in recent parcels but the Jeeps were old models waiting to be built or repainted for years. The idea was to make the a Recce squadron for a British divisions at Garden and the first few Jeeps for the US 101st Airborne division. 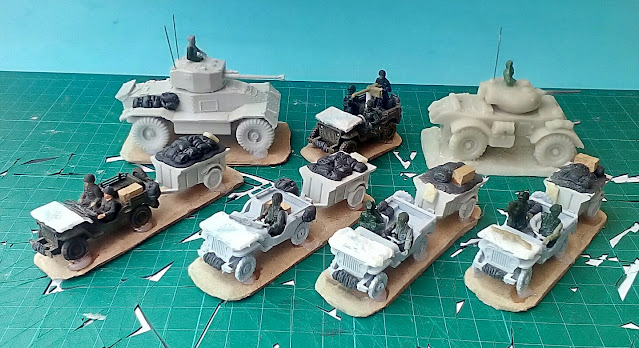 The AEC armoured car is a BPM 3d print as well as all trailers. The Staghound A/C is RTR Raventhorpe. The Jeeps are Airfix (the ones that comes with the LVT-4, grey colour), Fujimi (the green one with trailer) and Hasegawa (with the Browning MG). All models got plenty of extras as figures, stowage, jerrycans, windscreen covers, etc. 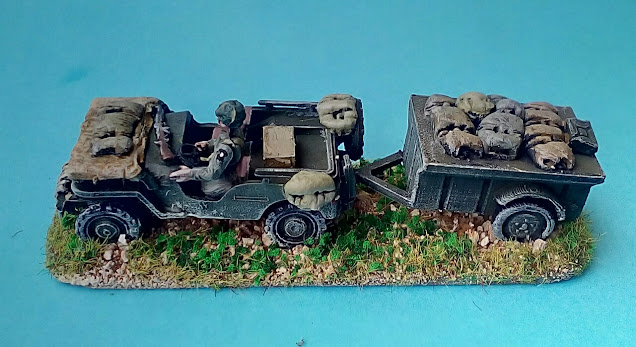 The drivers are plastic Esci or Revell figures with arms from the spare box.

These models were great fun to build. I used tissue paper for the windscreen covers and PVA to stick them. 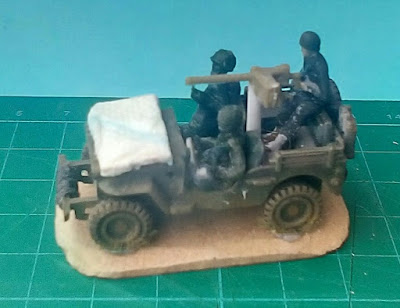 The MG armed Jeep got a Valiant Browning and the binoculars figure from Hasegawa bent with fire until it could man the MG. 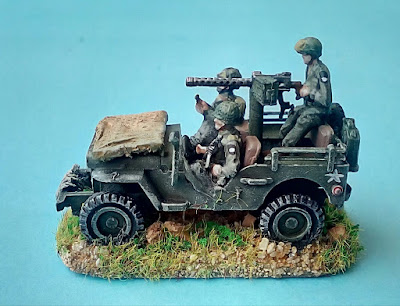 The final result gives a nice and different model. The helmets of the Hasegawa figures got the 1st aid kit for them to look like paratroopers. The US vehicles were painted GW Castellan Green. 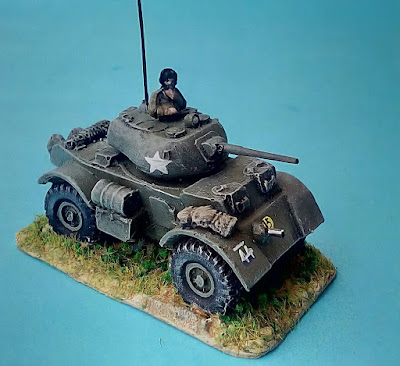 The RTR is easy to put together with only turret, gun and body as separate parts. The stowage is already modelled in its place so only a figure, an MG and a antenna were necessary as extras. 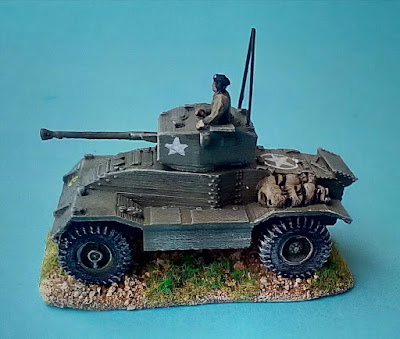 The BPM AEC A/C was painted first with thick varnish before the grey primer and again this seems to cover most of the printing lines. Even so this technology is getting better and better and detail is also increasing. These British vehicles were painted Vallejo WW2 Russian Uniform.
Next: more OMG or France 1940.
Posted by João Pedro Peixoto at 08:59 8 comments: