Those BUM miniatures are really hard to find, no? There are no other plastic SCW infantry, right? Right. But if you give a good look at the most common plastic sets available you will see that some quite passable infantry is not hard to convert.

I saw on the web some modellers using the Hat WWI Austrians and Serbian boxes as the basis for Republican Spanish. It's a great idea but I didn't have any of them around so I used mainly converted figures.

The action takes place in the village of Casas Amarillas (obviously...) and you can see an EPR (Ejército Popular Republicano) battalion with 4 companies, 3 of them rifle and one HMG. 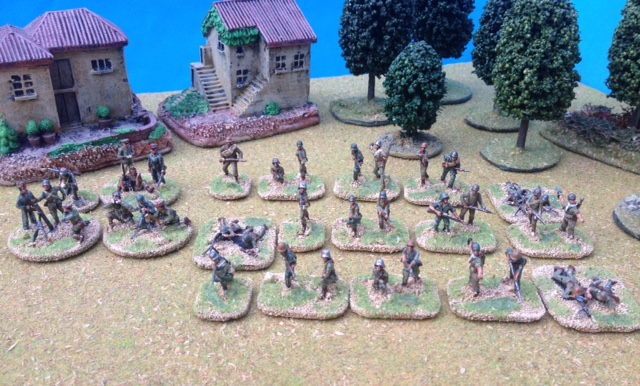 They are are mix of metal Irregular Miniatures with WWI and WWII Esci and Revell plastics, as I did with the Moors. 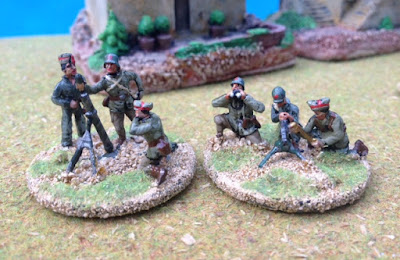 The Republican infantry used the Spanish Trubia, Czech and Adrian helmets besides the Isabelino cap and other headdress namely the Pasamontañas cap (very close to the Austrian WWI cap). For the Trubia I've used the heads of German Revell WWI figures, the  Esci Japanese for the Czech helmets  and for Adrian helmets from both Airfix and Esci heads.

On the mortar you can see (L) an IM figure, the mortar firer of the Esci WWII Russian set (with a Trubia helmet and opened coat to look like the guerrera) and an Esci US WWII mortar crew with GreenStuff Isabellino cap.
The Hotchkiss group has (L) the observer with the body of the Revell WWI German figure with an Airfix Adrian helmet; an IM firer and another Esci US HMG crew, again with Isabelino cap. The Hotchkiss came from the Esci Japanese with scratch built tripod. 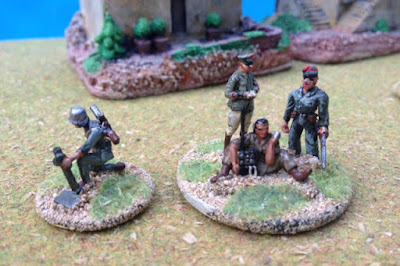 The light mortar (with plate added) is an Esci Japanese with Revell German WWI head and PPD sub-machine gun on its back carved from a PPSH 41. The command set is a Russian officer and the Australian radio man, both Revell. To the right another IM figure. 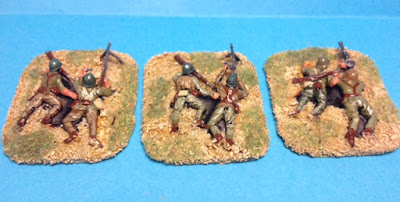 The LMG's sets are made of a mixture of Japanese, French and Russian, all Esci both hard and soft plastic.

From left to right you have a Russian Esci and two IM figures. The fourth figure is made out of Russian legs and a Japanese torso all Esci. The two last figures are a Revell US marine with a Czech helmet and a Esci WWII French with Trubia Helmet. I used the Revell US marine uniform because is quite similar to the mono used by many Republican troops. 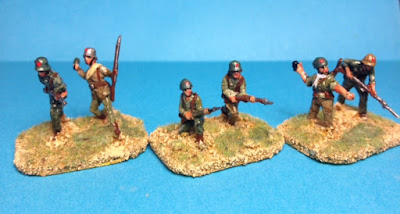 More of the same. The fourth figure is an US Matchbox venerable body with Trubia Helmet. The last of them is again another Frankenstein with Revell Marine legs and Esci Japanese torso. 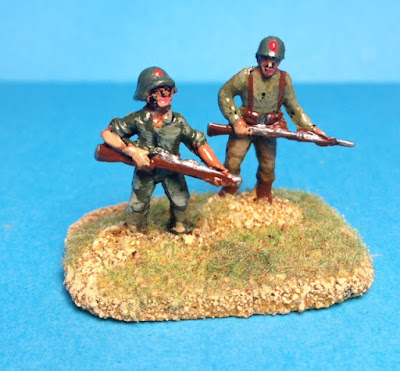 Metal and plastic happily living together is the same stand. 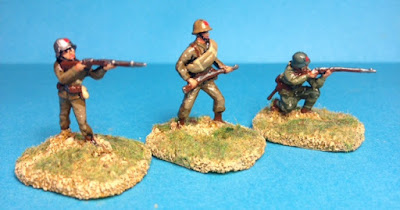 Some of the figures got an EverGreen blanket roll which desguises some faults on the uniforms.

On the modelling table I have planes, artillery, tanks, cavalry and infantry some half done other half painted. More stuff to do than time available... Where did you hear this story? 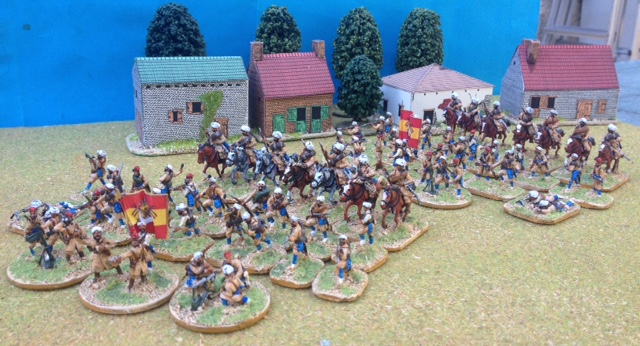 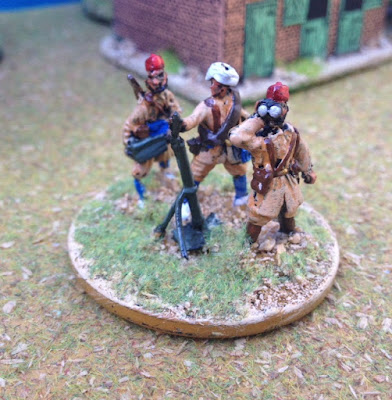 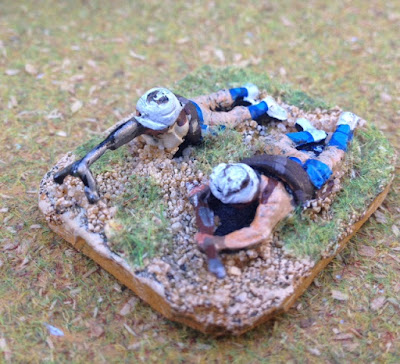 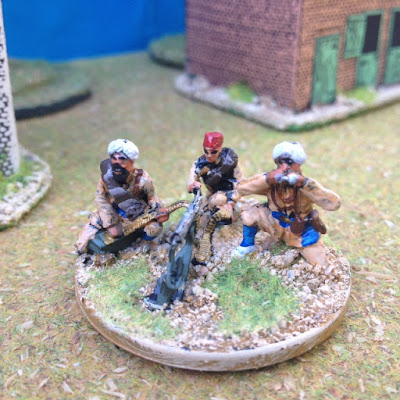 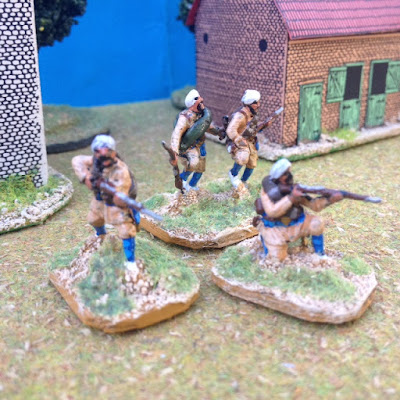 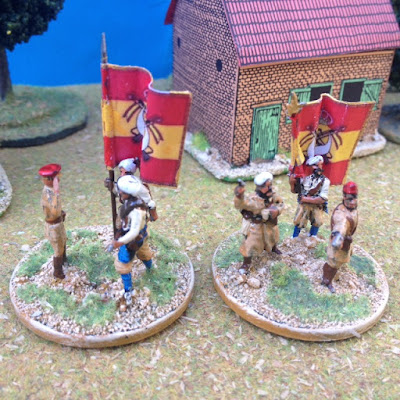 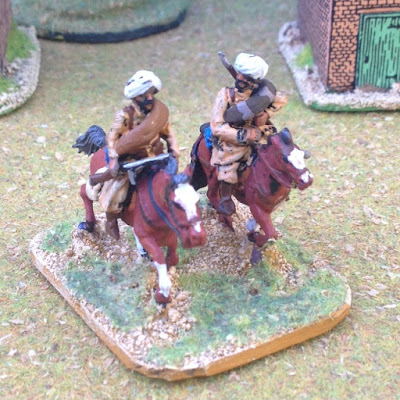 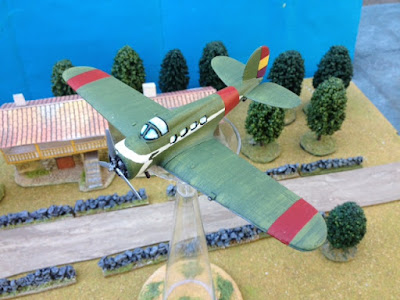 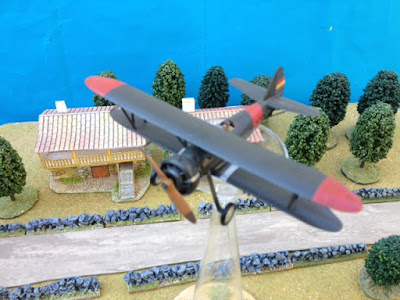 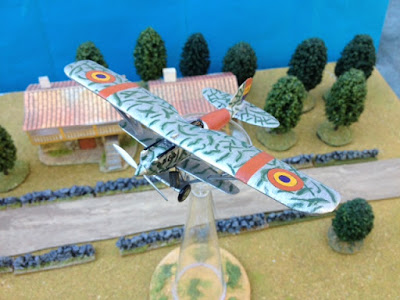 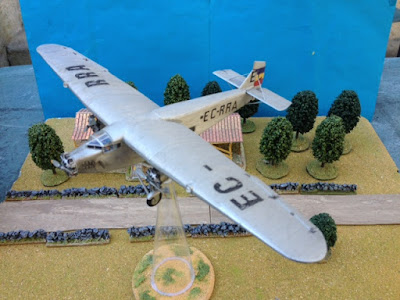