This post is to be read by people who like to buid armies and not for those who like to spread jealousy all over with their painting and modelling skills. If you are in the 2nd group, read no more.

I´ve watched with a certain surprise, or not, in the last few years, the democratic birth of hard plastic 28mm historical figures: the scale of the "true" wargamers. Suddenly some "true" wargamers were painting and playing with inferior quality figures made of metal, when compared to the Perry Miniatures or Victrix plastic range for instance.

Well,  this "true" wargamers scale is constantly forgetting that besides Perry (the finest hard plastic without any shadow of a doubt), Victrix (the finest...also),Warlord (very,very good) and a few more I didn´t buy yet, there is another poor manufacturer who in the last few years produced hundreds of fantastic boxes of 20mm figures covering dozens of conflicts, and with an average excellent quality.

More important to this short information of this truly yours, Hat also produce 28mm hard plastic figures (Napoleonic and early middle ages)! Yes, those you can cut and glue different heads and stuff, while the opposite is impossible in metal!! Some 20 boxes up to the moment!! Yes, it is true, they do, believe me!! Ok, their napoleonics aren´t as good as Perry´s. But hey, the Perry brothers are probably the best sculptors in the world so the competition is one sided. Also with surprise, in the main british two wargames magazines there isn´t a single word about Hat 28mm in the vast majority of their articles when they say something about hard plastic 28mm figures ("England will prevail", Churchill Dixit). Well everyone knows one of them is dependent and the other is independent, but both strongly and understandably ( I wish the same happened in Portugal...) defending their own cottage industries.

Specially for those outside UK, Hat figures- U.S, but made in China- are easily available and  deserve a word, better, many photos. To my knowledge and humble opinion, Hat 28mm figures aren´t inferior to many metal manufacturers, and they are many times cheaper and easily available with French, Bavarian and Prussian infantry in different marching, in action, and command boxes, and with many more nations on the pipeline. Hat only loses when compared to manufacturers of the Perry Miniatures caliber.

Nevertheless, judge for yourself. 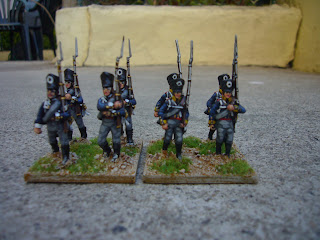 Next photos are dedicated to Pedro Casimiro, the enlighter. 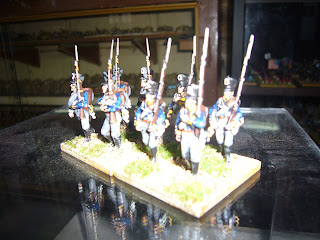 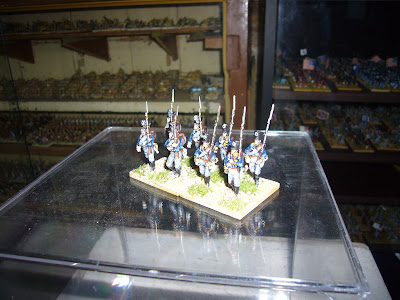 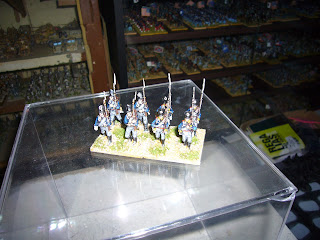 I know the photos aren´t good (I´m a great and humble modeller and painter but a lousy photographer) but in groups, small or big- as you can see in previous posts- Hat figures goes reasonably well with others. They are true 28mm figures and not 30mm as many tend to say.

Yes, I wish Hat produced them a bit larger, but they are cheap, realistic and very well researched figures, not to Calpe standards it is true, but figures you can paint easily and build armies with.

And have fun, which is the most important aspect of our hobby.

Posted by João Pedro Peixoto at 16:42