The DCRs for the 1940 campaign in 20mm and for Rapid Fire! wargames rules

Posted by João Pedro Peixoto at 11:30 No comments:

Rapid Fire! Operation Barbarossa and beyond in 20mm - One more clash at Dubno/Brody

The battle of Dubno/Brody, in nowadays Ukraine, was the biggest tank clash of history with over 4000 tanks battling each other in a triangle between the cities of Dubno, Lutsk and Brody. To represent it in RF! terms you would need 800+ tank models for this short period of summer 41 in the East. It also includes some models that for sure are not the wargamer´s favorites like PzIII short 50mm; T-26, BT-7, etc (not counting a football field to play it all). Even if sometimes I exaggerate I don´t intend to reach those numbers due to the danger of bankruptcy and expulsion from home. Even so I´m around one Soviet Mechanized corps ( a mix of the 8th and 15th) and one full Panzer division for this short period of time without brown camouflage and short guns on tanks (a generic PzIII G/H/J based one, capable also of other campaigns like the Balkans and Greece). 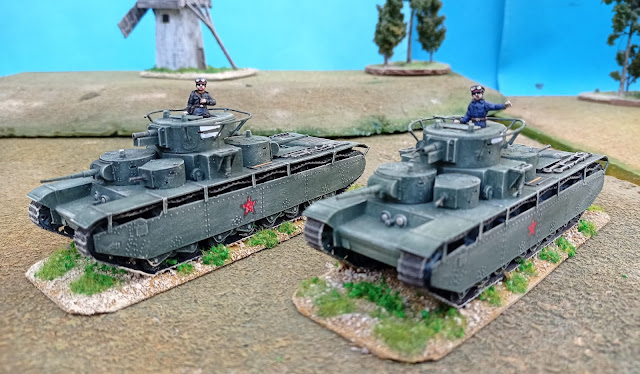 Two more giant T-35 from S-models were added to the 68th Tank regiment. With four now in the inventory maybe I´ll build another two and settle the issue:  the proposed ten by Master Richard is just too much considering they arrived in very small groups and many broke down. Hmmm... but 10 is tempting!.. 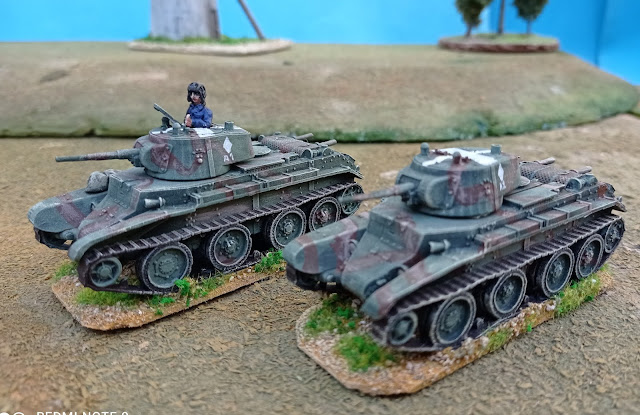 Eight more BT-7 were added making a total of 15 enough for 2/3 Tank battalions depending on the unit. All my BT-7 are Mário Laranja´s great 3d resin prints. This company got a camouflage of brown 6K as used by some tanks of the 4th Mechanized corps in Ukraine. 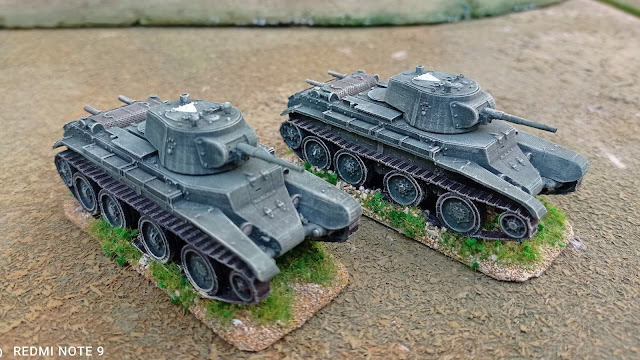 Again some 4th Mechanized corps painting influence with just a white triangle for air recognition on top of the turret. 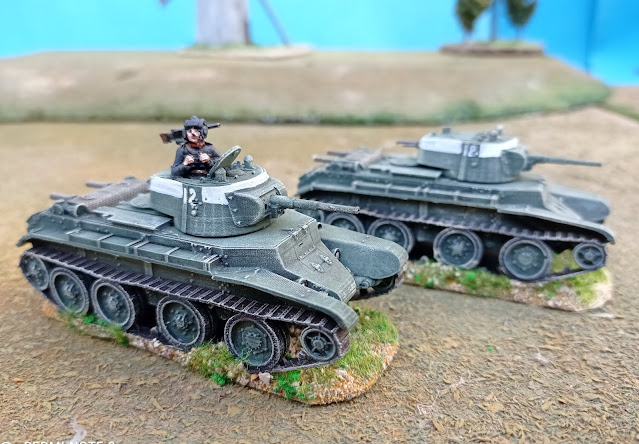 The markings of these two BT-7 came from 39th Tank Division at the battle of Uman. 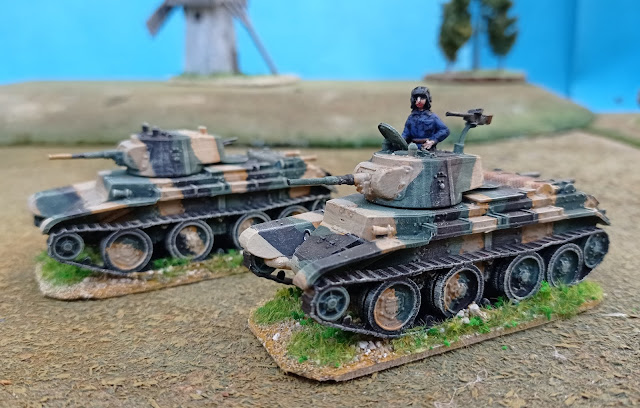 This kind of camouflage was taken from the 24th Brigade of Light Tanks, Rostov-on-Don. This camouflage was quite common and I used it also on my BT-5 and consisted of the basic 4BO color with stripes of 6RP and 7K. 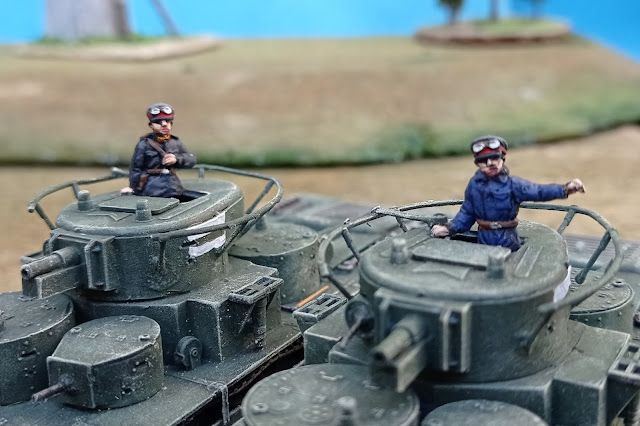 The figures on these batch of tanks is Xan Miniatures from Spain. Probably some of the best around. 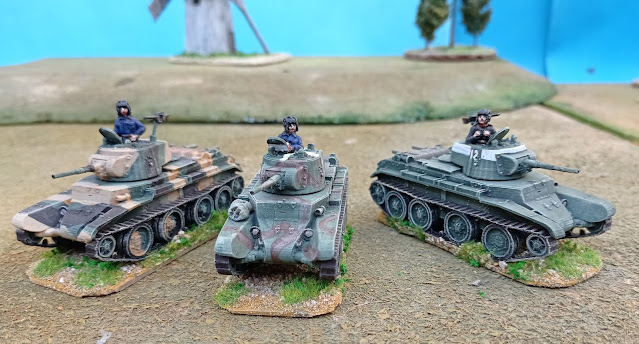 A few more Xan Miniatures with the padded helmet. 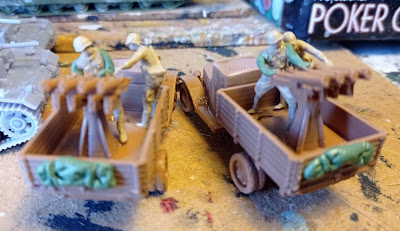 Lastly a pair of Self-propelled AA MG 4M-GAZ-AAA (Uffff...) from Minigeneral PLA 3d prints with Revell converted crew with the help of GreenStuff. 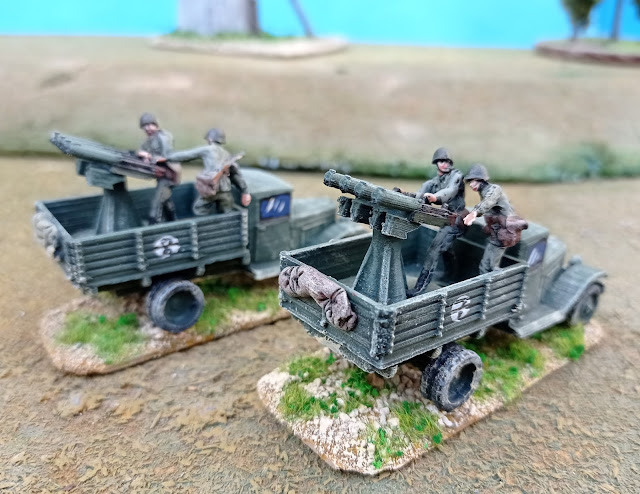 The built is very simple and the result is quite sturdy. The soft plastic figures were glued to several parts of the vehicles for them to have a firm grip. 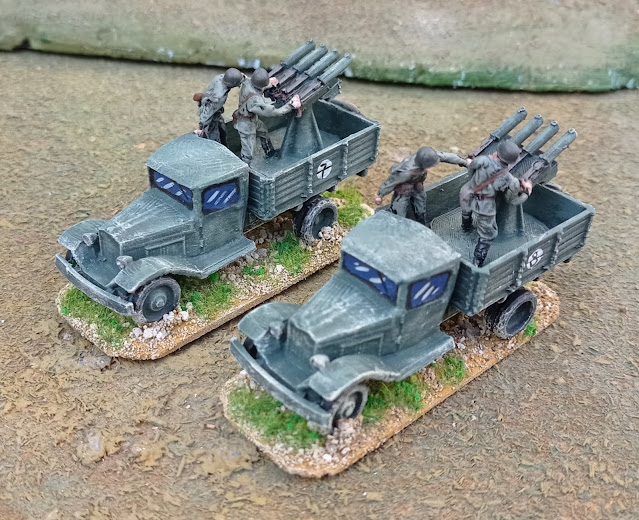 The printed plastic had two coats of clear varnish before priming for the printing lines to become insignificant. 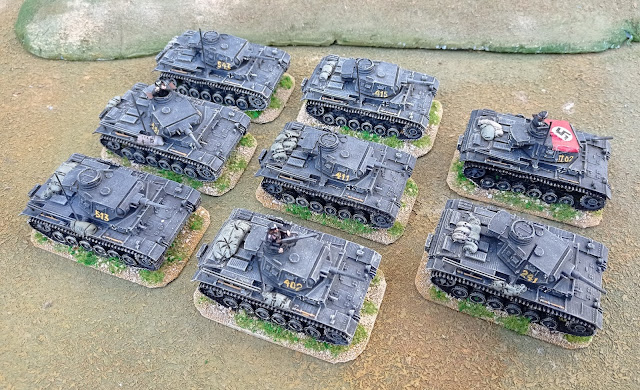 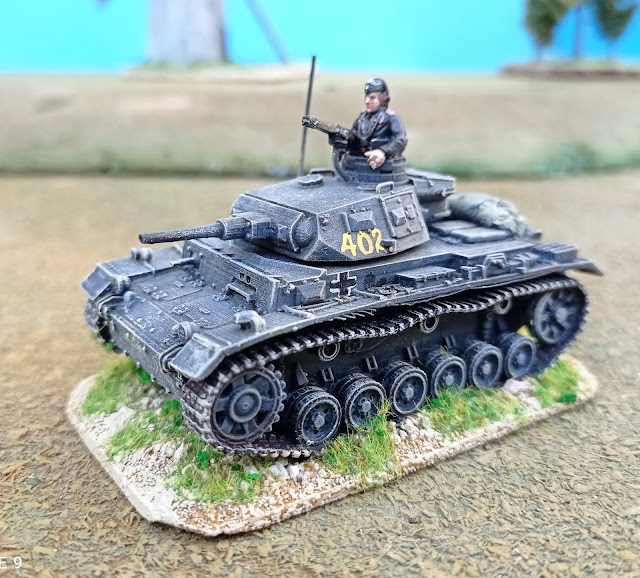 This company commander tank got a turret MG. I'm not sure if this system, the Fliegerbeschussgerät (my goodness, he even knows German...) was used of the late versions of the PZ III short 50mm as all my references are for the late versions of this tank. Even so it looks nice and makes a difference in the lot.
Next: Probably a video on the French DCR of 1940 or the last few British tanks for the 1st British Armored Division of 1940.
Posted by João Pedro Peixoto at 10:33 14 comments:

3e DLM for the 1940 campaign in 20mm for Rapid Fire! wargames rules

5e DLC for the 1940 campaign in 20mm for Rapid Fire! wargames rules

This is the smallest of the French division types for the 1940 campaing. The 5e Division Légère de Cavalerie (5e DLC) tried to stop the Germans in the Ardennes and fougth them at Sedan and Abbeville. Its very interesting due to its old material and number of horses. The figures and vehicles are a mix of Simon Soldiers (pioneers and artillerymen); Hat, Esci,Caesar, EWM, Lancer and LesArméesOubliés (horsemen, Motorcyclists and Dragons Portés); Resin prints from Mário Laranja (AMR33, Unic P107BU and Simca Cinq); MiniGeneral PLA prints (75mm field guns and Lafflys), SHQ (SideCars and motorcyclists), Wespe (Renault ADH), Altaya (Panhard 178), Skytrex (H39) and plenty, plenty of my own conversions.
Posted by João Pedro Peixoto at 04:26 No comments: