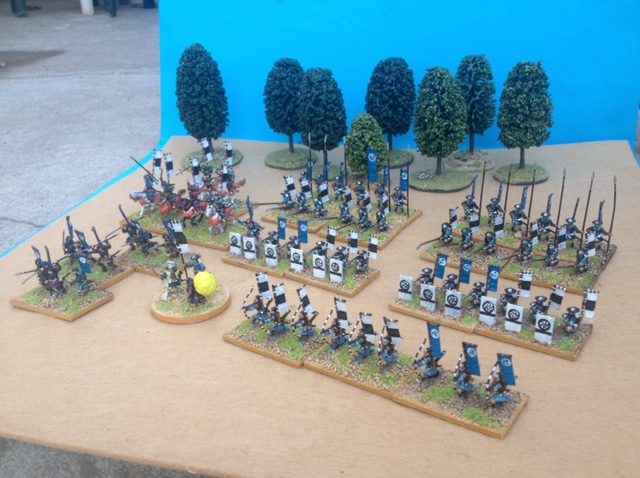 I looked in the web and found loads of information on the period and some nice free sets of rules like Damyo from Ian Duncan. Here they are along with supporting material:

I saw movies then (once, twice...) like Ran, Kagemusha, Furin Kazan and Ten To Chi To looking for inspiration along almost everything Osprey edited  and Stephen Turnbull wrote. Driven by usual madness I made a huge collection of boxes from the brands above.

As usual also after painting two clans I got fed up and I turned don't know were to... The damn samurai were far more complicated to paint than anything I had painted so far!

But the Sengoku period is just something so amazingly colourful that a few days ago the Bushido code banged my head again and here I am painting Samurai for the second time (and viewing the same movies, and books and web articles...).

My original idea was to portray all armies of Sekigahara 1600, the biggest battle of the Sengoku period between the Western army lead by Ishida Mitsunari and the Eastern army of Tokugawa Ieyasu but I think nowadays I will also do Takeda, Nobunaga and Uesugi clans, famous for previous battles and maybe I will leave some of the Sekigahara clans out. Its just too much.

Recently I found a pure gold mine, in fact 7 long pages with hundreds of clans and their flags: 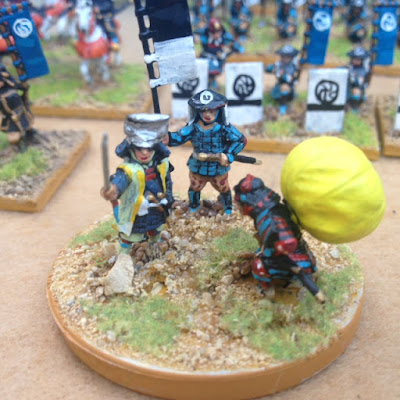 Let's go to the figures. This clan is Kuroda Nagamasa's that fought for the Eastern army of Tokugawa Ieyasu against Ishida Mitsunari's western army in Sekigahara.

Kuroda's figure is the Zvezda general in the infantry box. He had to have a new head from another samurai. The top part of the head was then squashed after heating and his helmet bent to become similar to the original Kurada was using: 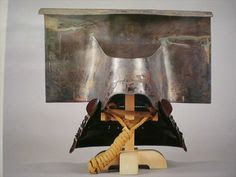 The Nobori bearer is a figure from the Zvezda command set.

The  kneeling Samurai  in not a lemon seller, no sir, he carries the Horo, the symbol of the messengers. 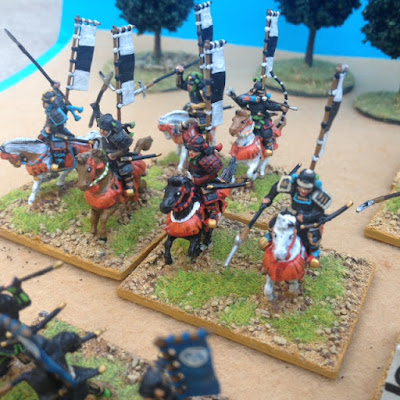 Zvezda Samurai cavalry. They are great figures whose painting I tryed to keep on the simple side but trying to give an individuality to each. The uniformity of the clan's cavalry is achieved by the horse's harness being of the same colour (which was mostly non-existing in reality) and one of two types of sashimono (flag on the back) this clan had. 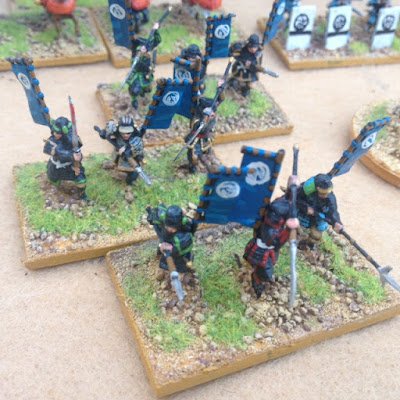 Foot Samurai from Zvezda. I chose the blue sashimono this time. I suggest to you to always paint all samurai in one colour first - as I already prime them in black its easier - and then add small detail in different colours. This will speed your painting process and you will have an extra clan more rapidly. 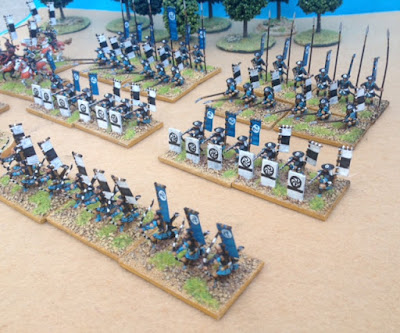 The Ashigaru ranks: Yari (back), Teppo (arquebus) and bow, all Zvezda. The Ashigaru, foot soldiers from lower classes, were 70% of Samurai armies by the year 1600. 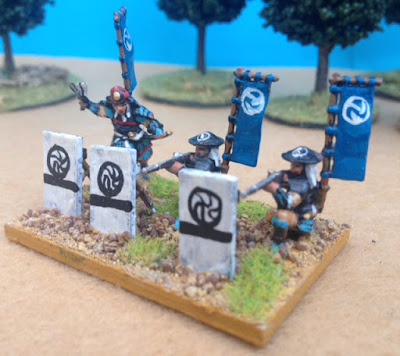 The Ashigaru were trained and lead by Samurai so I converted one Samurai as an officer of Ashigaru, one for each 5 or 6 stands.

Next: the Ukita Hideie clan (I know that because I already started it). 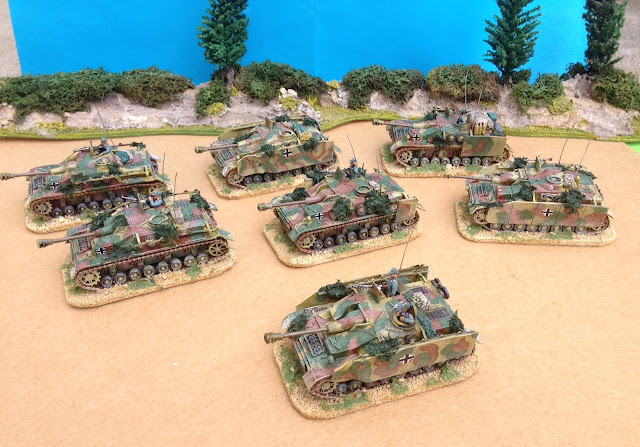 The last Militaria Hors-Serie No 95 is dedicated to the US 101st  Airborne in Normandy. Among other nice information and colour plates it shows the camouflage of the Stug IV of the 17th PzGrDiv. that fought against the Screaming Eagles around Carentan. The 17th PzGrDiv. had 42 of these relatively rare Stugs, when comparing with the Stug III.

As far as the images on the article shows try to cover Dunken Gelb with the other two camouflage tones up to 80/90% in big blotches in which the Red Brown always touches the Green.

The models are all Revell exceptuating the one to the far right which is Altaya. They are organised in three companies with a command Stug with two crew visible which is my way of marking the CO in an AFV unit. 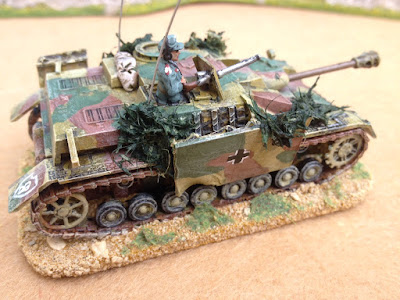 The Revell model is quite accurate but with little detail. The most important details missing are the tool box (behind the left side cuppola); the left side extra tank tracks.... 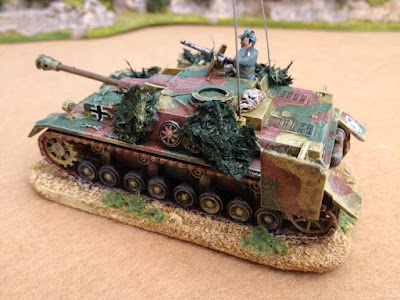 ... and the extra wheels on the left. These last ones were provided by Tim Caspers of Germany, a fellow modeller who produces in resin many of his own pieces and that gently send me a box filled with many nice parts, including stowage,  some you can see in last posts about Tunisia.

I also replaced the plastic MG with a metal one and placed a (plastic) ammo drum as used in german AFVs.

The foliage is made of Iceland lichen picked nearby, turned into a paste with green acrylic and wood glue. 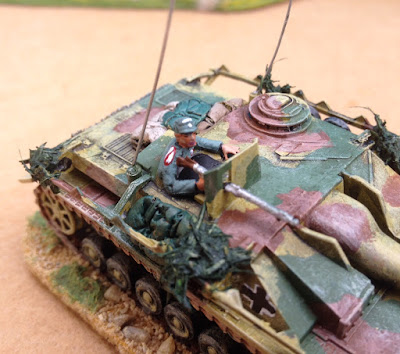 The only non-metal MG is this one converted from the Esci MG firer with a new Feldmutze. This Esci guy already carries the ammo drum on his MG and no bipod so he is perfect for German tanks. 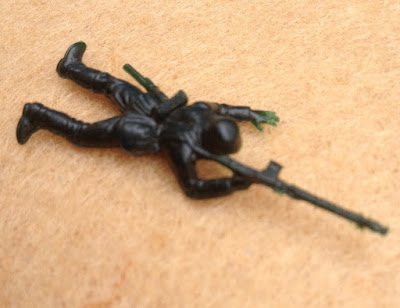 This one is already training to enter the Panzer corps ... were he will loose his legs and head most likely as you can see in the previous picture... 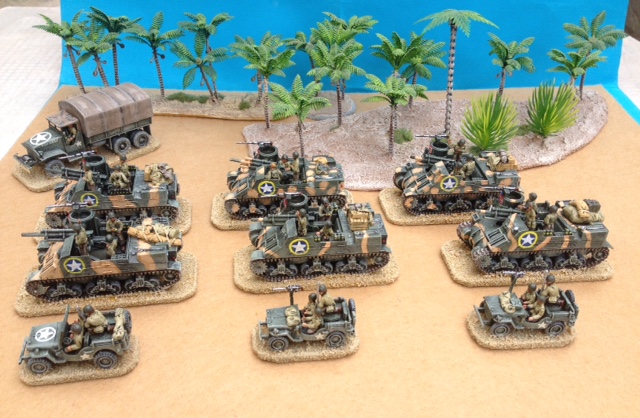 This battalion was made mainly using the Matchbox M-7 Priest, some OP Willys Jeep from Airfix and a Hasegawa 2-1/2 truck for ammo supply. 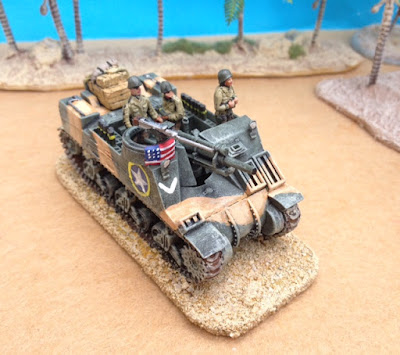 I tried to get the M-7's as colourful as possible so I grabbed all shiny details applied to US vehicles during the Tunisian campaign. The white stars have a blue background and yellow circle; there is a 'V' marking I saw in a B/W Picture and the US flag used at the time of Operation Torch painted in the MG pulpit. Also different  camouflage was applied.

The figures come from many different places as I had only left a few of the originals. The others are serving Saddam Hussein's army and possibly somewhere else I can't remember. More about this in a series of future posts. 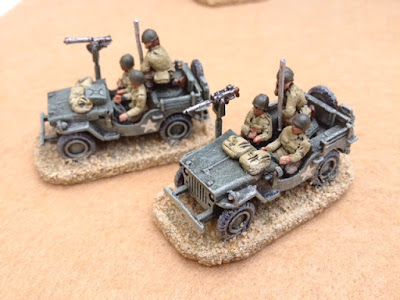 The Willys Jeep had some changes with the loss of the windscreen and the placing of the MG support close to the right seat. In the Tunisian campaign the MG's for the Jeeps were also switched for the more usual Browning .30  and the water cooled .50 instead of the kit's  air cooled .50 cal. The radio figures are metal Irregular Miniatures. 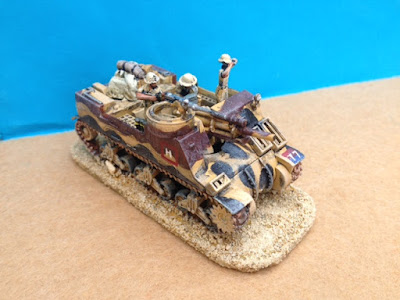 The primer cloud was also used to finish one more M-7 Priest for the 11th Royal Horse Artillery.... 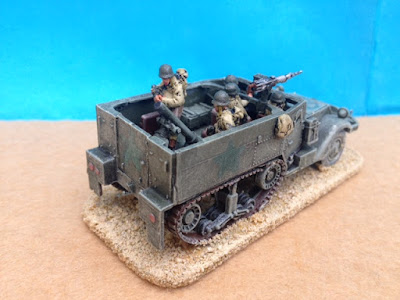 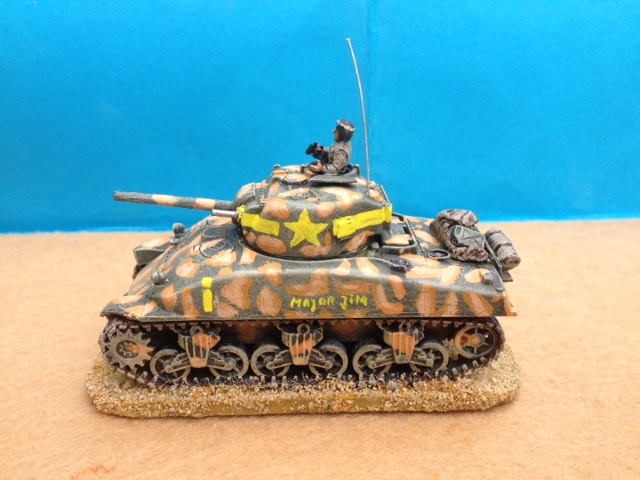 'Major Jim' was the Sherman from the CO of the 2nd Battalion, 13th Armored Regiment. The hull is the Revell 76mm Sherman and the turret comes from the Matchbox Firefly. The mantlet, gun and bogies  are scratchbuilt for the early version of the M4 Sherman. 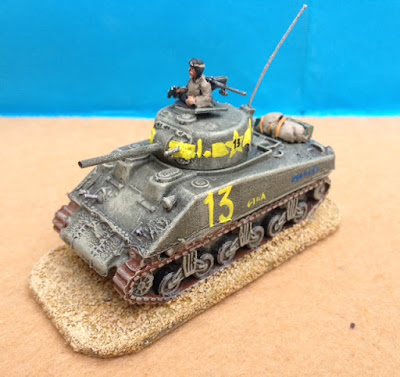 And now the reason to get back to Tunisia (there is always a strange reason to get back to a wargaming period...). I had 4 very old soft plastic Atlantic Sherman. Apparently they are useless being short in height and with a strange gun and mantlet. But the rest is reasonable. So I raised the hull from the tracks some 2mm with the help of hot glue, built a new mantlet from GreenStuff and EverGreen styrene and placed an accurate 75mm gun taken from left over Pz IV barrels. The two strange middle wheels close to the bogies were also taken out with an X-Acto.

Like this they become close to the Airfix Sherman and 1st US AD grew in numbers. I found another half priced Lee from Altaya in a toy fair and repainted it with the colours of the 2nd Battalion, 13th Armored Regiment. The commander is completely scratchbuilt from an Esci British torso from their Churchill tank with german arms with binoculars and GreenStuff helmet. 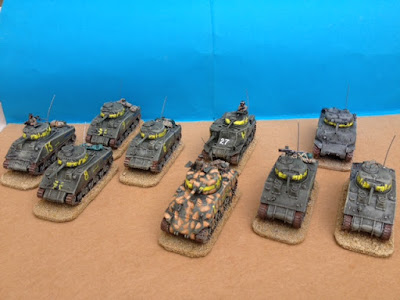 From left to right the new stuff: The four Atlantic Sherman; 'Major Jim' and the Lee; two M4 from Airfix and an Esci/Italeri in the far end.

For you to find the correct markings for the US 1st Armored in Tunisia you must buy, beg or steal (or ask to JMM, he will find it...) 'First Blood-US 1st Arm.Div. in Tunisia' from Claude Gillono, Firefly Collection.

And now lets give some mobile artillery to 1st Armored otherwise things will be even worse then they historically where.