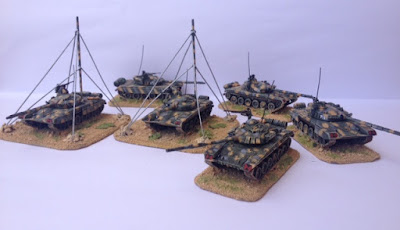 The command T-72 had their telescopic mast made out of a metal sewing needle as I run out of that size of Evergreen tube. The spider web structure are plastic broom threads. Exceptuating the Zvezda T-72 close to you  all others are Battlefront. 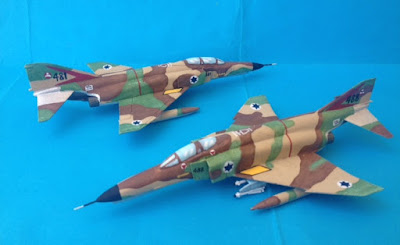 The Phantom to the left is a repainted Fabbri model with an elongated nose made of GreenStuff. The one to the right is a straight-from-the-box Tamiya kit.

The 3 colour scheme is made of Vallejo Iraqi sand, GW Mournfang Brown and Warboss green.

All markings are, as usual, hand painted (Uauuu...) so it's good to keep some distance not to see the flaws :) 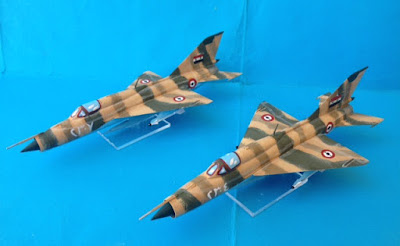 Tamiya 1/100th scale Mig-21 from Tamiya. Quite old moulds but recently re-released and proving Tamiya is a hell of  a brand. But I think many of us will never forgive Tamiya for never having made small scale tanks while making dozens of them in 1/35th scale! Bahhh, what a waste of fine plastic and talent, it remembers me GW... 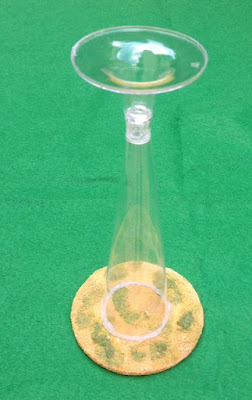 Now for some aircaft stands. These champagne flutes can be found nowadays in supermarkets. They are plastic and cheap. Glued to balsa or other wood  bases  that you only need to texture and paint they make aircraft stands with a nice balance and capable of holding metal models. While glueing the flute to the textured base don't use super glue as it will release some white dust from the cyanoacrilate to the inside of the flute ruining the work. Use instead wood glue or hot glue. 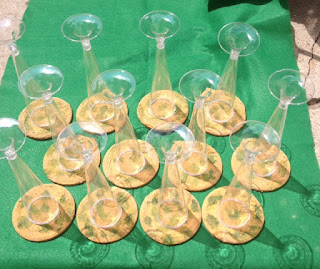 It's always better by the dozen! 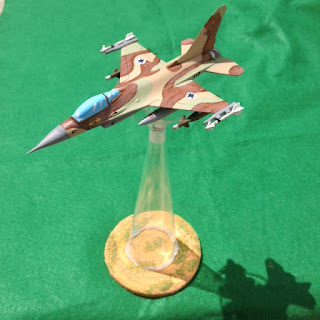 Turned upside down the flute has a recessed base which is ideal for ammunition and reserve tanks to enter and better support the model.
Posted by João Pedro Peixoto at 12:42 2 comments: 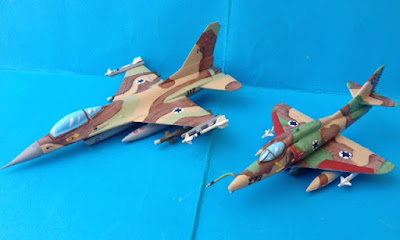 Repainted Fabbri 1/100th scale aircraft again. The camouflage of the Israeli aircraft in Lebanon is one of the attractions for wargaming and modelling this campaign and the Syrian, as you will see, also have striking colours.
No decals, all markings are hand painted. The decals in wargaming  for me are always tricky specially when applied on planes. If you want to use several models of the same aircraft what generally happens in 1/100th scale is that numbers specially tend to be hard to find. Besides that if you paint your markings there isn't that problem with shining decals then a product to eliminate that, and then gloss varnish, and then matt, and then... something else in an apparently endless chain of tasks.
Next, some Syrian Mig-21 from Tamiya. See how organized this blog is becoming? It even warns the spectators about the next program like in TV!
And now let's everybody shout:
SPOOOOOOORTING!!!!
Posted by João Pedro Peixoto at 04:32 2 comments:


Recently I bought in OLX in 2nd hand the full collection (52 models) of the Fabbri/Italeri 1/100th scale aircraft, at 1 Euro each,  that roamed the skies a few years ago. On those days I was already probably around other collectables and another collection would have been too much as this kind of buying doesn't stay cheap and besides you buy what you want and what you don't want.

Eleven of them suits the Lebanon 82 campaign both for the Israelis (pretty much) and (only a few) for the  Syrian.

As they come already painted and the seller had already built them I didn't have much work only a few new camouflages and markings. 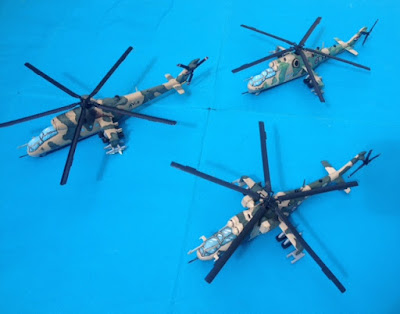 Only the Hind on the top is new, the one to the left is a Revell model. The full squadron is ready in spite of the Syrian Mil-Mi-24 Hind didn't participate that much in the campaign as their crews were not familiar with their new machines leaving the main task of attacking the Israeli ground forces to the Gazelle fleet. 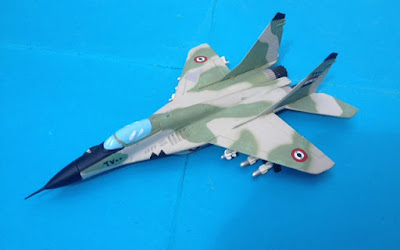 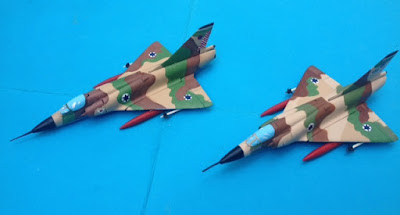 The Mirage III was kept in reserve, with their task being left to their younger brothers the IAI Kfir. 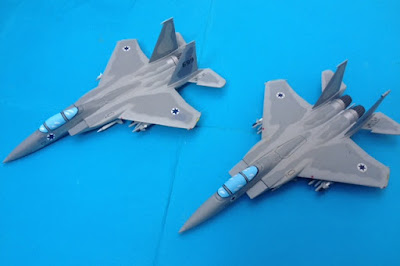 The F-15 bore the brunt of the fighting in the skies with the usual zero losses against many as said by the Israelis and a few losses according to Syrian and even American sources. The 'Turkey shoot' that the Israelis annouced on those days over Bekaa valley may not have happened in fact. The Syrians admited their losses in the air - over 80 - but the Israelis may have lost 21 of their aircraft.

Plenty more to fly in the next few weeks, while the fever lasts. Stay tuned.