One more big unit with most of the vehicles taken from the shelves of other Divisions. Even so the Pz III M, the infantry figures, the Marder IIs, the IG75s and the 150mm howitzers were all built on purpose for this Division.
Posted by João Pedro Peixoto at 09:21 No comments: 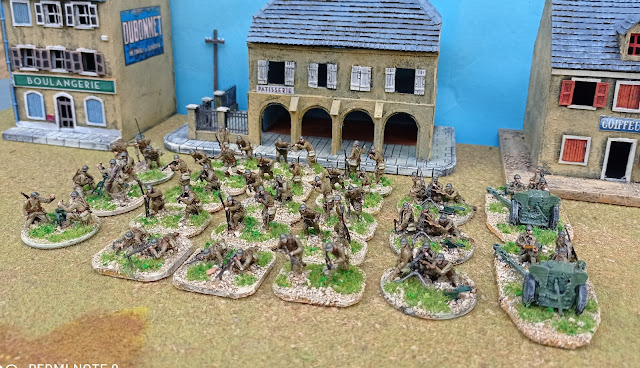 In the main square of the small village of Lucas Hernandez (clearly close to the Spanish border) a French infantry battalion prepares itself for review.
This is the 7th battalion of infantry for my DI/DIM and the first made of Pegasus figures. The figures are a delight with two Hotchkiss MMGs in each box and with two/three types of rifles distributed among the figures - the more modern MAS 36 and the older Lebel or Berthiers - and two different positions for the FM 24/29 firers, besides officers and rifle grenade launchers. The only problems are the lack of the 60mm and 81mm mortars, of a radio, but that is typical of many figure sets. More on that later. 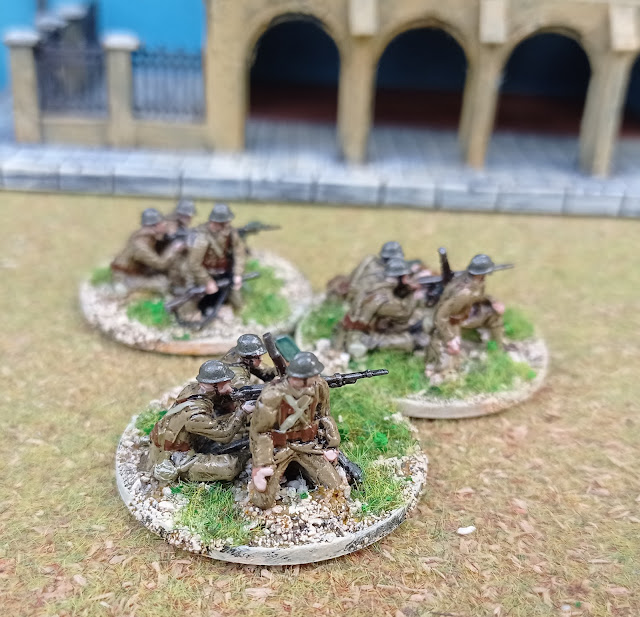 Our masters Colin and Richard order us, their humble servants, to place 3 figures in each MMG. So one kneeling and firing figure was converted as the number 3 with new GreenStuff arms in each gun. 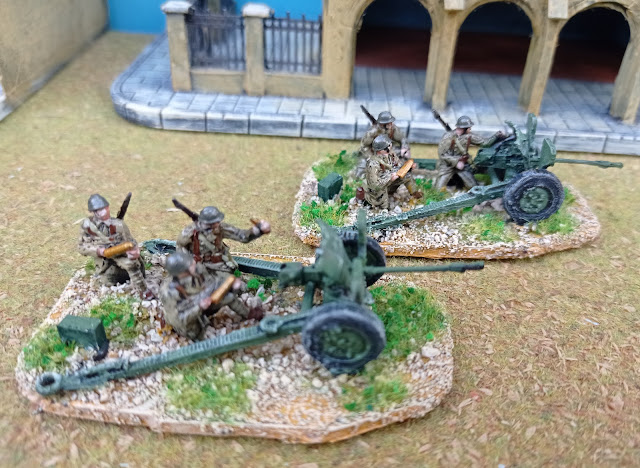 A few more Pegasus kneeling figures went to crew the MiniGeneral 25mm Hotchkiss AT guns together with a few conversions from the Revell WWI set. 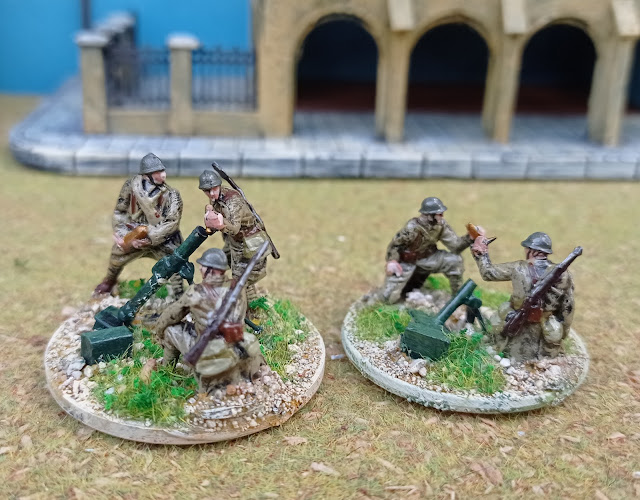 The mortar issue was solved with a few conversions: the figures got new GreenStuff arms, rifles on the back and some plastic tiny parts in the hands to look like mortar shells. The 60mm mortar is scratchbuilt while the 81mm is a Hat Stokes mortar with a few cuts to look like the Brandt. 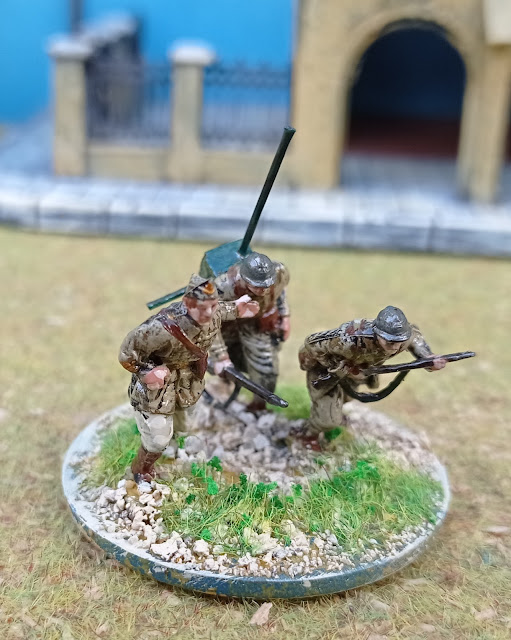 The command group got a radio on the back of the figure that looks more loaded.

One of the infantry companies. The two last battalions of French Infantry will be mostly like this one and then I can call the DI/DIM done.

Next: probably a video on the Herman Goring LPD in Sicily 1943. 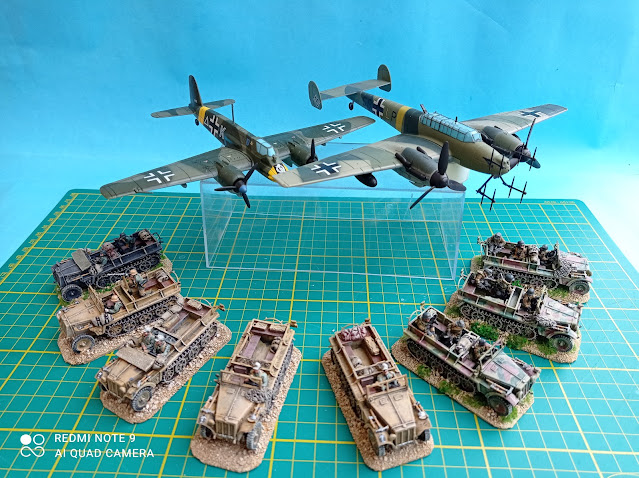 No, not  a fan of Christmas. Of course we had the family reunions, the gifts for the younger and older ones and never ending food. Love to be with my people but frankly hate Christmas and I´m always dying for it to pass. One day if the Christmas message extends into the full year with visible results of world wide happiness and all kids have the one toy they want,  maybe I´ll start to like it. 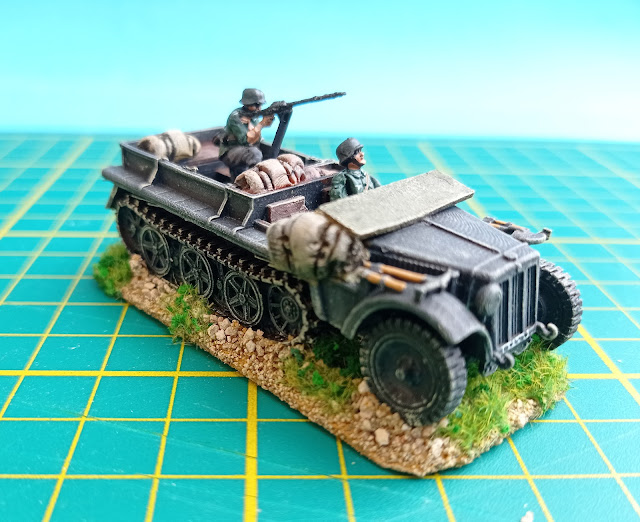 One of them went to the Blitzkrieg/Barbarossa period to be coupled with a number of the from BPM. Once again one piece vehicles which are a pleasure to paint as they are crammed with detail. 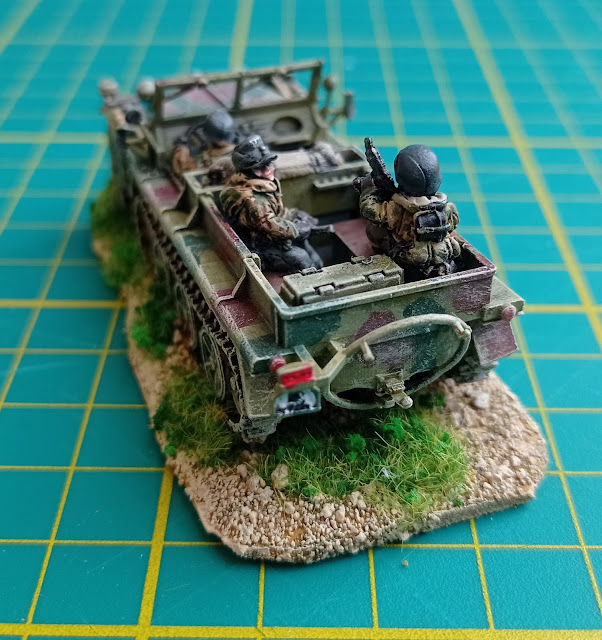 More fine detail to the rear. 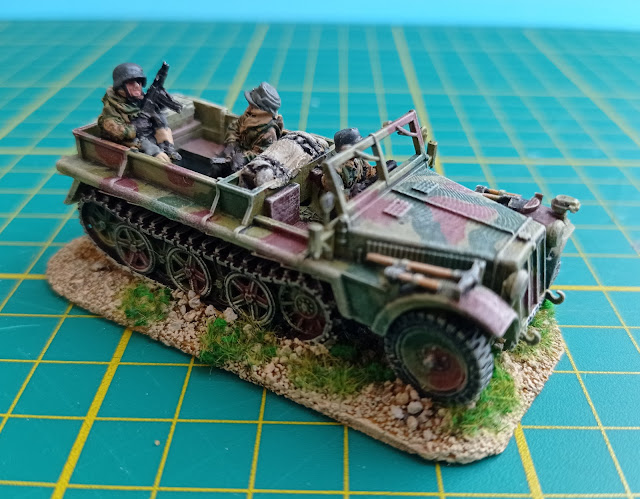 How hooks, tools, mirrors, etc are made in one piece is for me a mystery but the end result is something great.

These four are joining the DAK. No specific unit so they can be used by several of them. Most of the figures are PSC heads on top of Milliput torsos.

Another group was painted with late war colors and crewed with the excellent Simon Soldiers figures winter passengers. 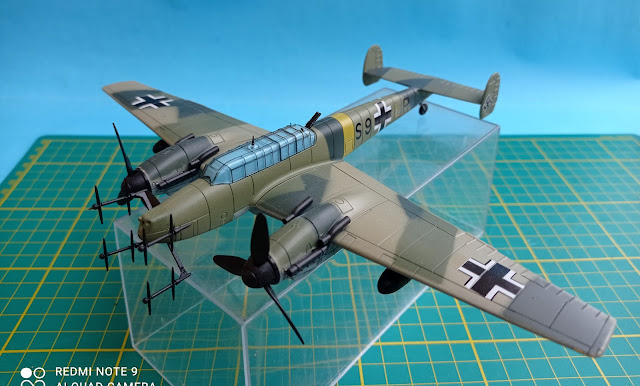 One more Luppa aircraft came out in 1/72 scale, this time a ME 110 NachtJäger. 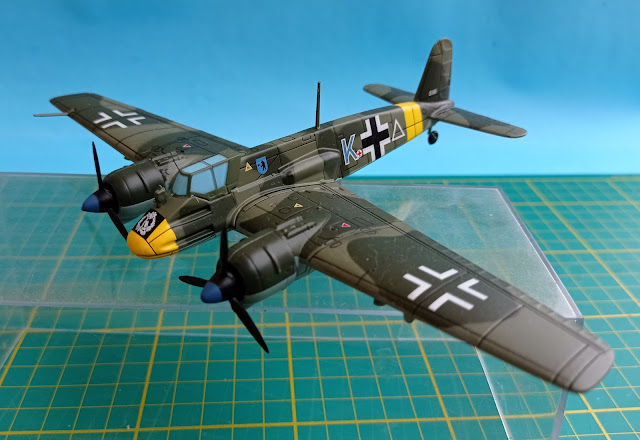 This one is an Altaya model that lived its last few years inside the transparent plastic, an Henschel HS 129. In both aircraft the usual and simple painting of the canopy interior makes it ready for action.

Next: The 7th infantry battalion for the French 1940 DI/DIM.

The Arras counter attack by the Frankforce, France 1940, for Rapid Fire! wargames in 20mm size

Another video on the British in France 1940. On the 21st May, the Frankforce caused a temporary panic in the German 7thPD and forced Rommel itself to direct the AT fire of its men. The slow moving British machines, coupled with very bad infantry-tank cooperation turned the operation into a failure, even if some say it helped saving many of the French and British that retreated to England from Dunkirk. The models are my usual brands; vehicles from MiniGeneral 3d prints, AnyScaleModels, Airfix, Matchbox and S-models, with figures from HAT, Revell, Esci, Zvezda and Emhar with the usual conversions (I've just checked and the correct way to say Arras is Arrass, stressing the final S).
Posted by João Pedro Peixoto at 06:41 No comments:

This is a project that took some 5 years to be concluded and it was a kind of childhood wish. The information on the early British units was very scarce and no plastic models of the main brands were made in 1/72 or 1/76 when I was a teenager in the 80ies.
Recently PSC made the A9 and sparked my attention - again - for this period, and the Portuguese 3d print brand MiniGeneral made plenty of models for the Blitzkrieg period. Other models in this video are S-models, HAT, Matchbox, Esci, Lancer, Any Scale Models and Zvezda.
Some corrections: to the end of the video I mention Vickers Machine Guns instead of Lewis in the AA role and the small staff car is not an Austin Seven but and Austin Ruby. Please be free to include others in comments as it will help to improve this big unit.
Posted by João Pedro Peixoto at 10:51 2 comments: 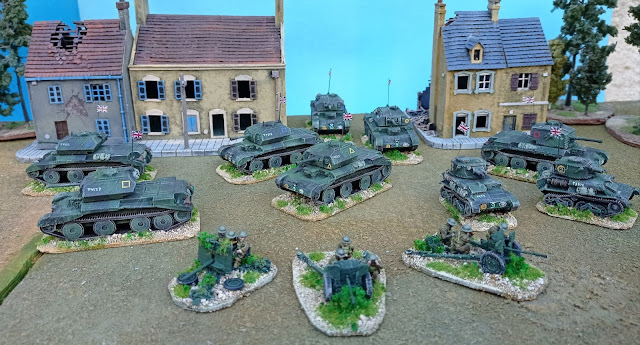 During the ill-faited Abbeville offensive, tanks of the British 1st Armoured Division managed to conquer the very small village of Mathieu Valbuena (this one is only for football lovers) and its three houses, one of the few successes of the 27th May.
Like this the 1st Armoured Division is complete, with all its six tank regiments and support group. From the AT guns only the 2 pdr gun is for this division with the two French Hotchkiss 25mm guns going to the famous Frankforce of Arras fame. 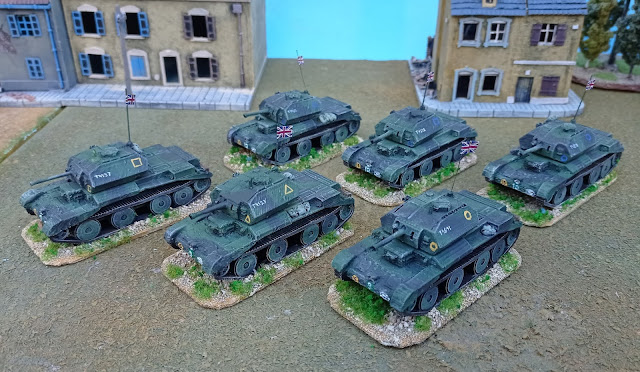 The last six A13 MKIV are the usual Minigeneral PLA 3d prints. Simple and effective models even if showing its age with plenty of printing lines, something quick to happen in such an evolving technology. 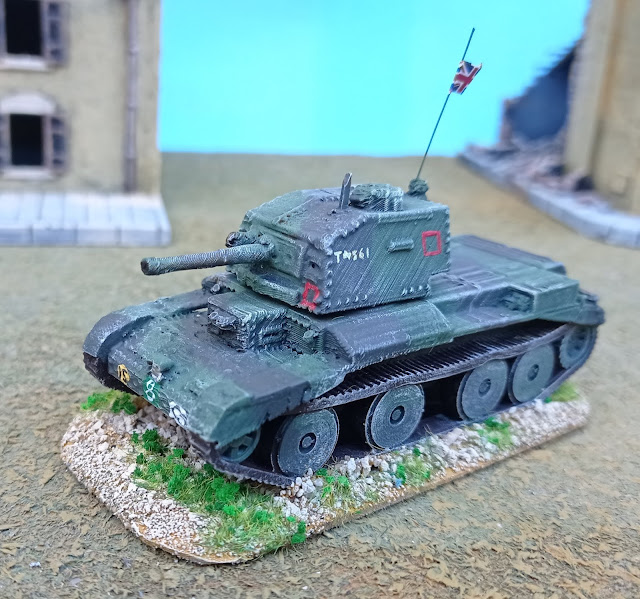 The last A13 MKI was also added. In Minigeneral models of the A13 the chassis are the most troublesome with very fragile mudguards which had to be rebuilt in most cases. The printing lines,  mainly visible at the front, were disguised with several layers of varnish but at the cost of detail loss. 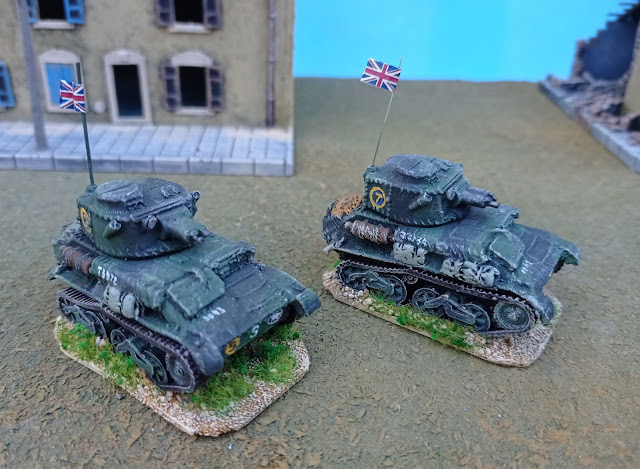 Same story for the Vickers MKVI B. Some stowage was placed were the printing lines were more visible. 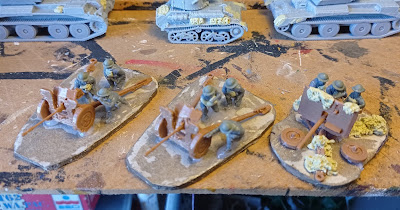 All the AT guns are also Minigeneral, two Hotchkiss 25mm and one 2pdr gun. The crew are PSC converted figures from their 6 pdr gun set. One of the beauties of PSC is the lavish number of figures they offer to man their kits with plenty of extras you can use elsewhere.

All figures got a gas mask bag for them to come back to 1940. Another change were the heads whose helmets had netting all over (not that suitable for 1940) and were replaced by US heads from the HAT WW1 artillery set. 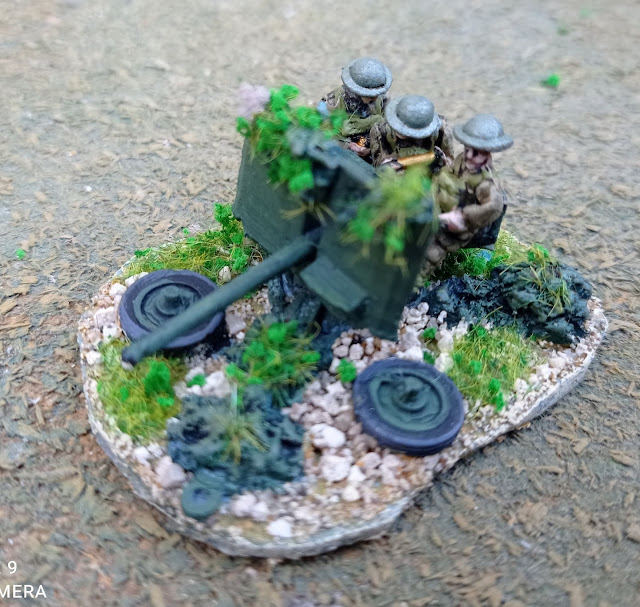 The seated figure in the 2 pdr is a full HAT figure with disguised puttees and jacket. 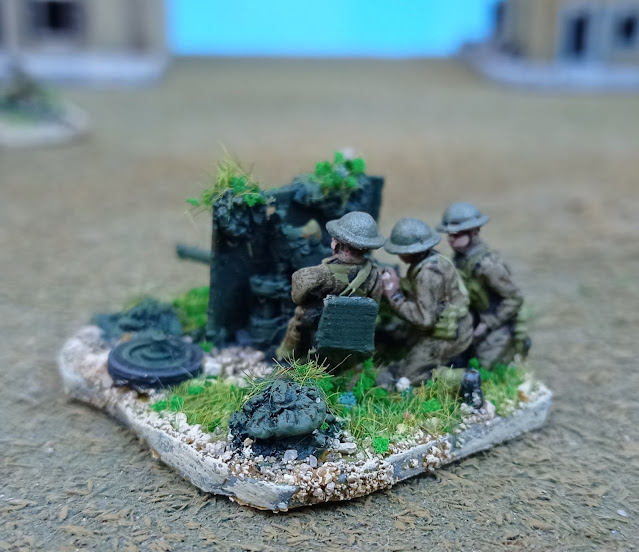 The base was cut to meet the shape of another group of three Zvezda guns of the same type. 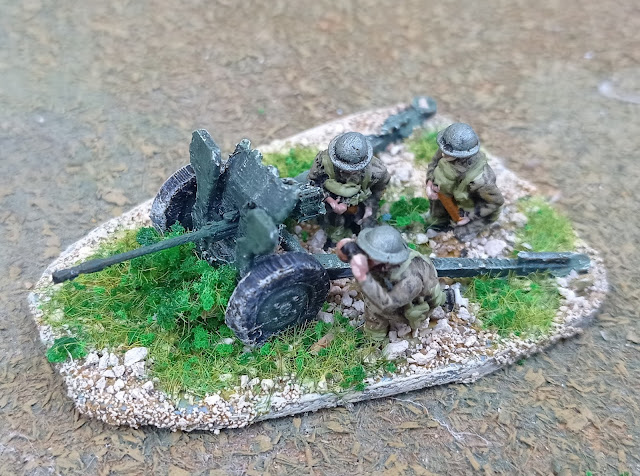 The printed 25mm guns have the right proportions being longer both in the barrel and legs compared to some metal models from other brands.
Next: a video on the British 1st Armoured Division in 1940.
Posted by João Pedro Peixoto at 11:38 2 comments: