Finally I managed to paint the the Bronekaters....
I used web info for that purpose. Colours aren´t probably the most accurate but the final result is acceptable. 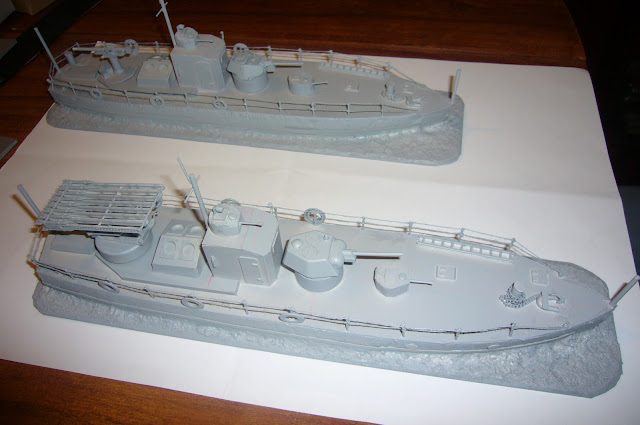 First, car spray all over. 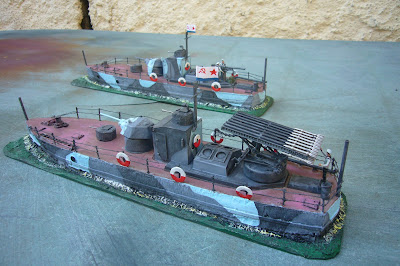 Acrylic Vallejo colours were used. Nothing special, just the ones I had around: Panzer Grey; Lutwaffe Blue and Light Blue. 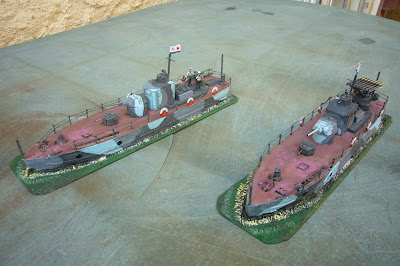 The flags were hand painted as well as everything else in that "wargaming  style" were we start from dark to lighter colours, drybrushing mostly. 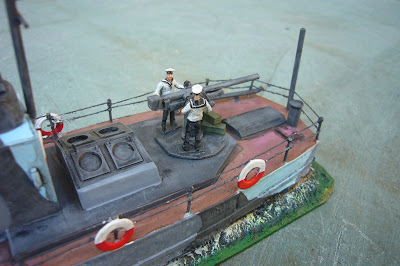 The figures are German WWII Preiser, painted to look as soviet sailors. 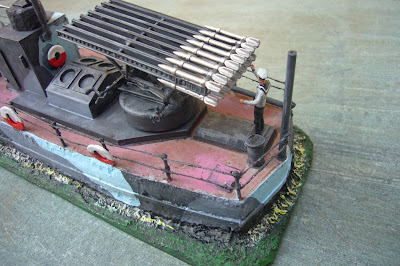 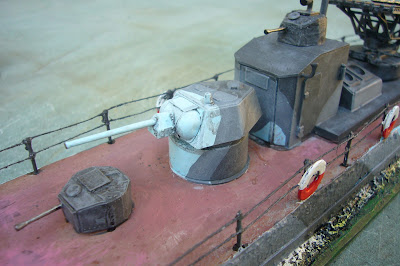 The deck was painted with GW colours. 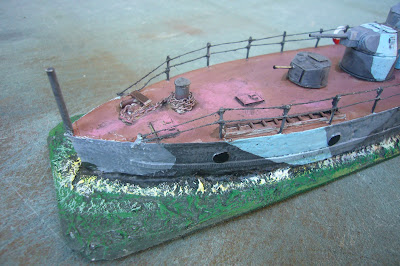 The river water was painted used the darkest green I had , followed by GW Snot Green drybrushing. The  angle between the boat and the water was painted black. In the end a little of yellow and white was drybrushed over the black to simulate waves. 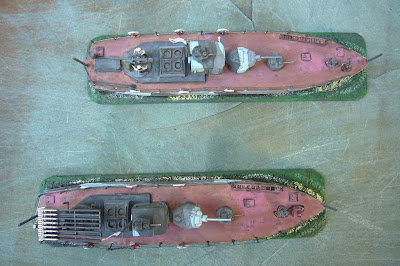 Some time ago JF (Jorge Faria) of Brigada Tripeira placed some nice photos of his resin 1/144 Bronekater, which oppened my appetite for a 1/72nd scale one. Beautiful painted kit with an even more beautiful river ... You must see it at the Brigada tripeira site.

In this month MW (344) Andrew Hubback (MW publisher) placed a nice scratchbuilt Bronekater. However Andrew´s gunboat is a generic one - he warned about that in the article- and I intended  to do something more historical.

So Internet showed me some very nice MIG 1/72nd and 1/35th scale and Boltaction 28mm Bronekaters, besides fantastic b/w photos and articles and those scratchbuilt and beautifully detailed 1/25th scale that even float and sail! Just surf  the net and all you need is there.

So several options emerged. I chose Styrofoam as a base for the hull and plasticard (Evergreen ) for other parts. 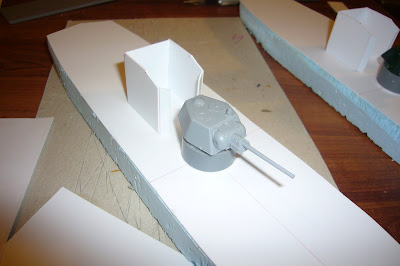 Size was decided (31cm X 6,5cm). Then the generic shape both in styrofoam and Evergreen. Two T-34 turrets - one Zvezda T-34/43  and another Matchbox T-34/42- were placed inside a plastic ring of unknown origin. 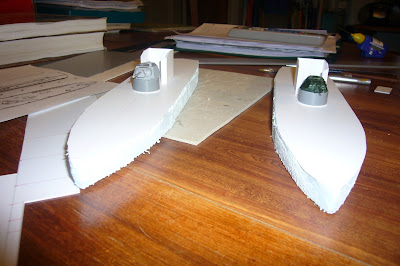 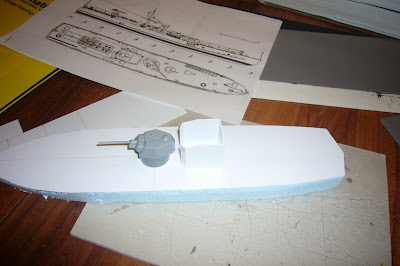 The command house is a simple Evergreen box shaped to size . 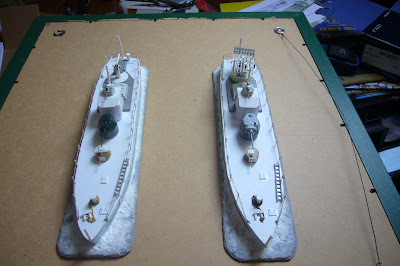 A few days later everything was ready. 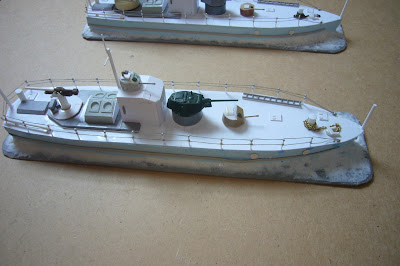 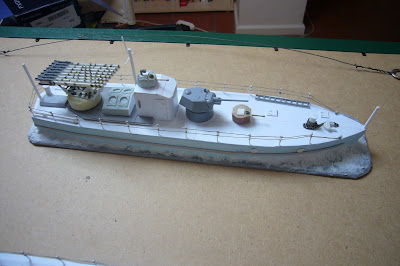 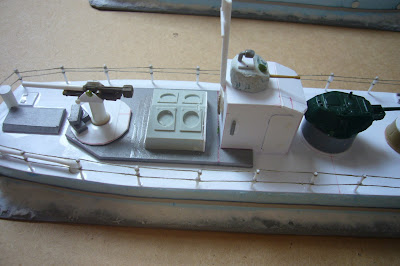 One of the Bronekaters had a rear exposed 76,2 mm gun (45 mm I read somewhere?), intirely scratchbuilt and based in a solo b/w photo of a parked Bronekater. 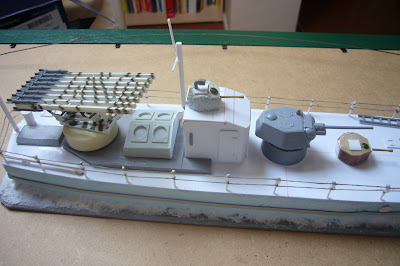 The other one had a Katiushka rocket system taken from the Altaya model. The truck will be useful elsewhere. The deck T-28 turrets were adapted ex-Matchbox Honey turrets given to me by JF. 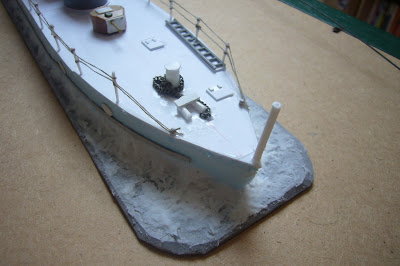 The anchors were made with Artesania Latina stuff. 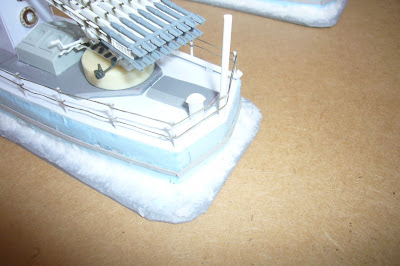 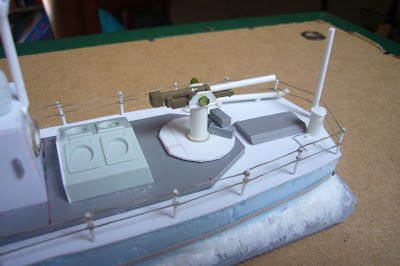 The surplus parts of two Matchbox Flower class Corvettes were used for the engine deck. 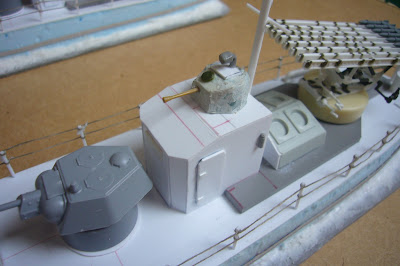 The small T-28 turrets on top of the command house were made of  two-part cement. All weapons systems have small pegs so the turrets can turn.

There are very few details on the deck floor as exaust tubing, etc would hinder movement to the naval infantry figures these gunboats are supposed to carry from time to time.

The bases are PVC sheets with plaster mixed with PVA glue to simulate water. The sides of the gunboats were sanded and given some coats of PVA.

Next is painting.
Posted by João Pedro Peixoto at 11:20 6 comments: