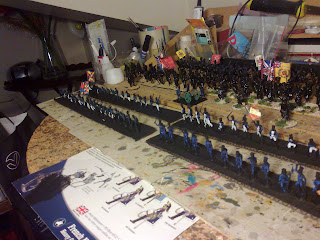 This idea came from the nice people that works at the Buçaco Military Museum. For some 3 years now  they have a fantastic big diorama made by Mr Keith Moore with more than 1000 25mm miniatures. Many people after watching it carefuly wanted something related to take home, and offer to kids or just to have a souvenir from the place. Long are the years in which this museum had some miniatures and card houses to sell regarding the 1810 battle of Buçaco.

This were I enter. I´m a fan of the battle of Buçaco since the first time my father took me to visit that museum when I was some 10 years old or so. Since then, with many time gaps in between, i´m a regular visitor to that museum and I like to copy the books I have on the subject and offer them to the museum, so that its staff can inform the visitors about what really happened.

I´ve  also visited the battlefield itself countless times, and I have great fun finding the smallest places of the battle and comparing them to the 1910 photos of Chambers and such, both in Sula and Santo António do Cântaro. 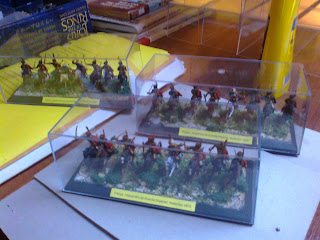 Some two months ago, Mrs Cecília and Mrs Livramento, asked me start painting some miniatures related to the battle and selling them to the visitors of the museum.
At first my lazyness about producing models that wouldn´t be mine in the future was inclined to say no. But then the idea of getting rich and also getting rid of hundreds, may be thousands, of miniatures that I will never paint, was stronger. Getting rich is something everybody wants, specially since crisis hit our door steps in 2008 and getting rid of many miniatures also, as I switched scale in my late napoleonics to 28mm, making redundant many of the stocked 20mm figures.


Also JF, PC  and JMM have been helping that stack of figures in the last few years offering me hundreds of those minis.
OB on its side is responsable for the name Pineapple Miniatures. "It will be bigger than Apple..." triggered the Pineapple name. So this will have to be a joint venture!
So the idea came: Placing inside those nice - but useless Planeta Agostini vehicles boxes - some twenty foot 20mm figures or 8 cavalryman from the Buçaco period, representing regiments and famous units; texturing the terrain and placing a striking yellow legend on it....Yeahhh.


Some of the figures were already painted: Hussars from  the French Imperial Guard; Valencia Volunteers; Brunswickers, etc, which helped to speed up the production of the first dozen of boxes. But then true work began.


I had to paint the Portuguese; British and French that were at Buçaco, without touching my own collection, of course. That forced me to transform many figures and to have a lot of work lately. But its funny knowing that people are ready to pay for what you are doing. 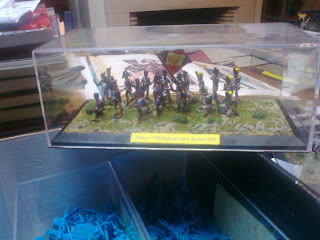 French Line infantry at Buçaco, 1810. The Voltigeurs are all conversions and even some of the Esci fusiliers , all with backpacks attached and some with new heads. The flags are also printed. 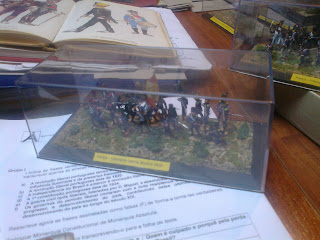 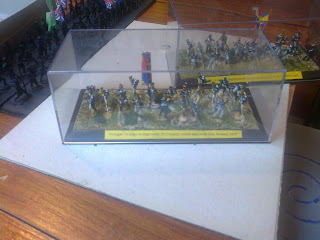 Cascais 19th regiment (already made 3 of those) charging the french at Sula. Many transformed figures also. To speed up painting I had to have a line production system: gluing figures to strips of card; black priming and then paaaaaaaiiiiinting by hand... 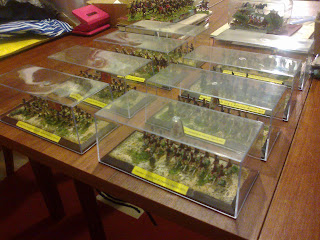 First batch to be sent to the Museum. 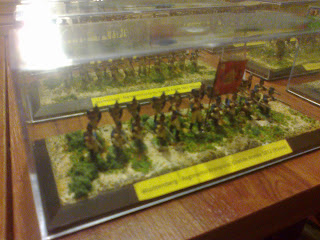 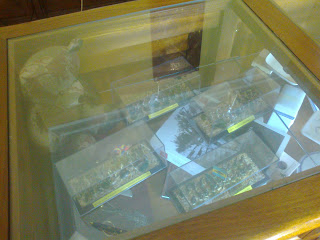 Already at the Museum... 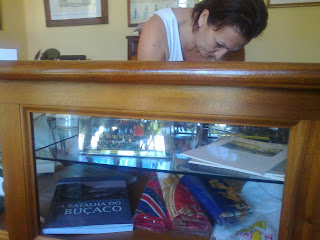 Mrs Cecília placing them for sale. 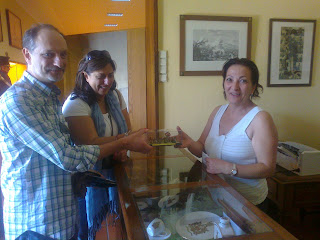 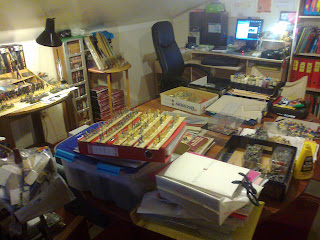 Just a look at the production spot: miniatures, books and internet. The essentials for such an activity.

Posted by João Pedro Peixoto at 05:46