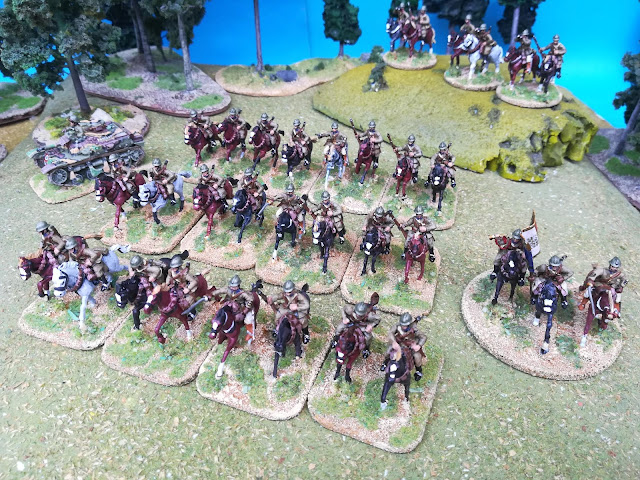 With the Germans crossing the Meuse River the three horse squadrons of a cavalry regiment of the 5eme DLC moves into contact. 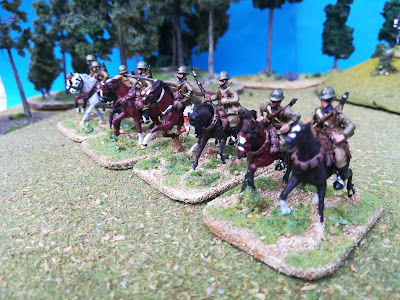 The figures are the WW1 Hat French  cavalry with a few  changes. 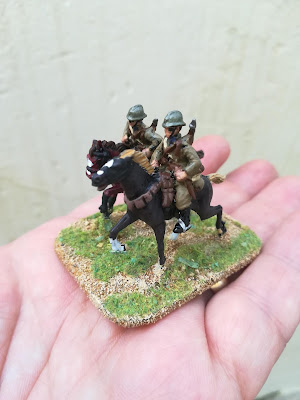 Many horses are ESCI from the Napoleonic Scots Grey box. I used all horses in a standing position for the limbers and horse holders of the next post. Specially the ESCI horses had all legs 'in the air' so they needed to get stuck to the base with hot glue. This procedure makes the stands quite compact and paint stays much better. 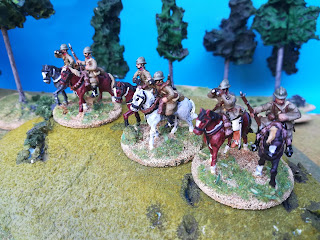 Also made are these three OP for the artillery. I used horses in the standing position and one officer per stand. 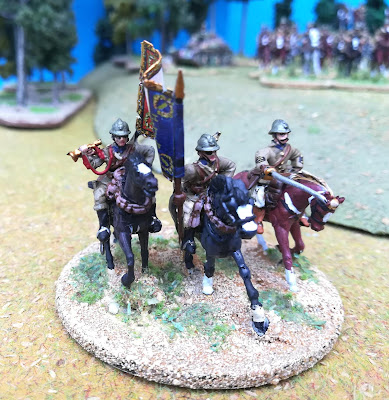 The command stand. Only the officer came directly from the box. The cornet has a new arm and the standard bearer carries a printed flag. 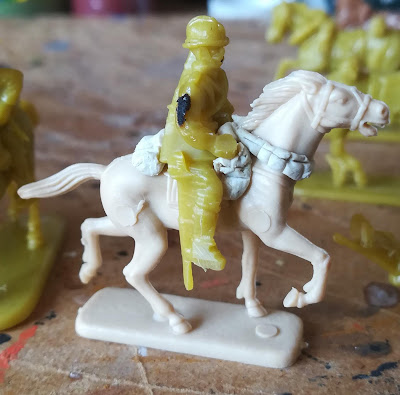 All cavalrymen had the lance carved out of its right arm. Then the arm had to be bent with a lighter (see the black dot on the elbow area) for the figure to grab the reins with both hands. 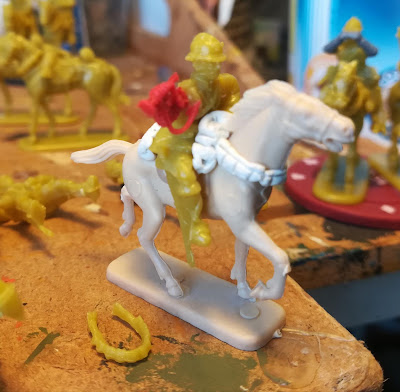 An arm of a Hat British cornet was used for this figure. All ESCI horses also had new equipment made out of two component paste. 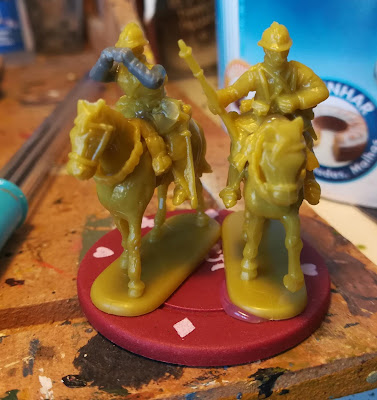 The OP officers have arms from PSC German figures from the Pz38t box. 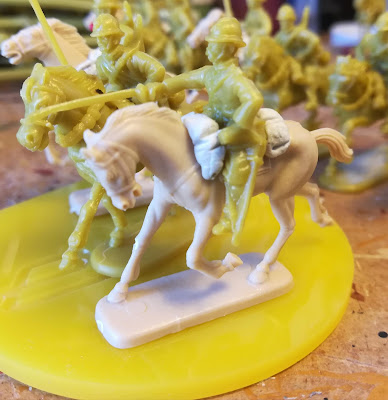 As you can see these horses really need to stay properly glued to its base and hot glue is a good way to avoid all those legs  in the air. 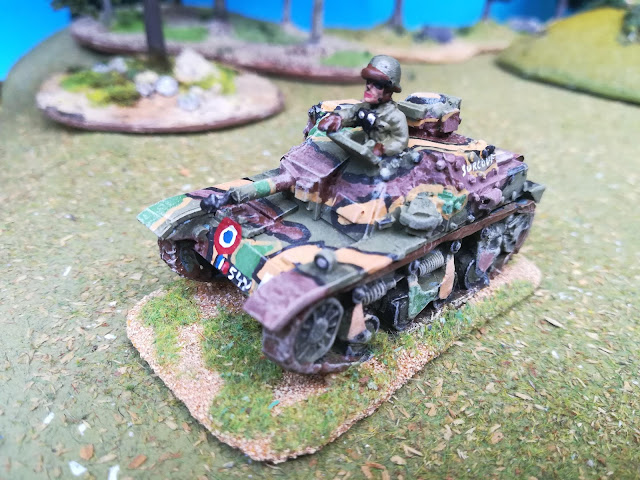 I also built a AMR35 ZT3. As only one is necessary per division I scratch built it in plastic card. 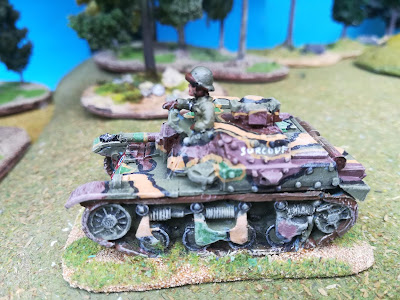 The command figure is from Lancer Miniatures. 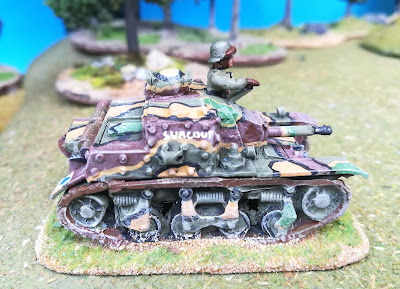 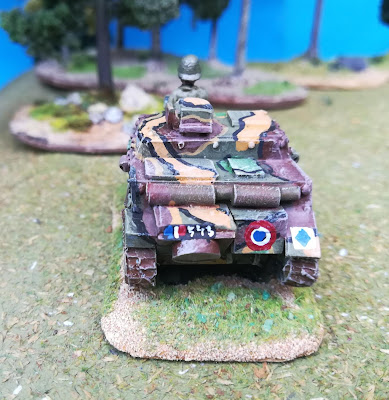 The camouflage is based on the Minitracks version on its site. But 25 euros (PP included) for a model 5 cm long made me scratch build this one. 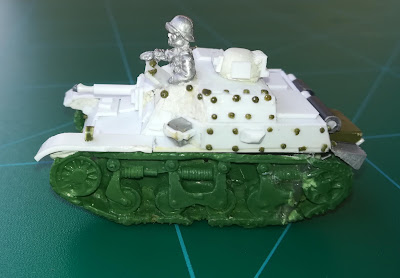 Still in the factory. 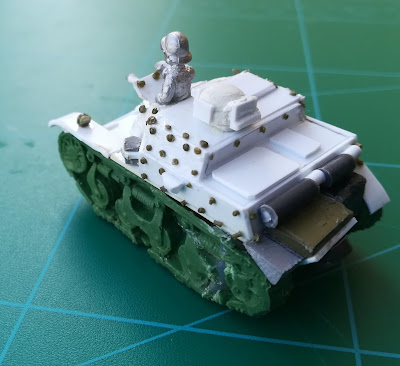 The rivets were not a big sucess. Here they are not yet trimmed but even so I should have not atempted to reproduce them. They look as if a bird... you know... 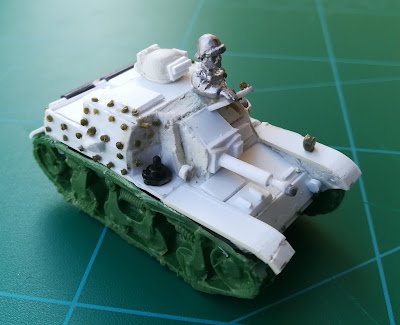 The cuppola is a blob of two component paste modelled into shape. 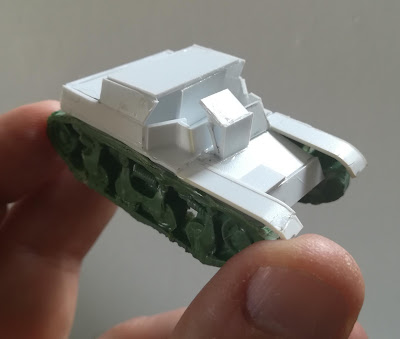 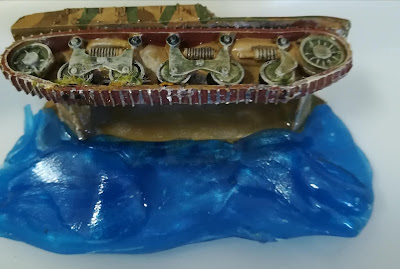 I reproduced the tracks of the AMR35 from an AMC35 from Skytrex with Bluestuff and then with GW Greenstuff . After copying the tracks I cut out one of the wheels as the AMR only has four of them . 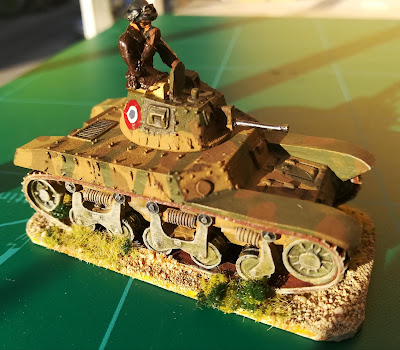 The original AMC35 from Skytrex that kindly let its tracks to be copied.

Next: Support squadron and horse holders for this Cavalry Regiment. Probably also a few other models that came from Lancer Miniatures will be included in the next post.

Posted by João Pedro Peixoto at 12:04