Rapid Fire! France 1940 in 20mm - Dr. Horch and Frankenstein in a MiniGeneral production 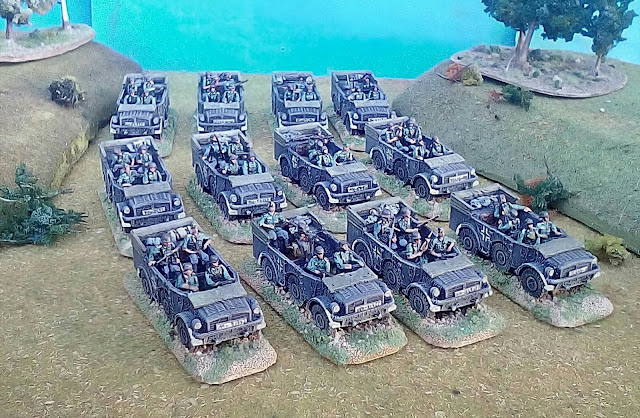 Master Richard and Master Colin told me I have to have 18 Horch 108 for the Shützen regiment of the 7th PD. I have still 6 more to do but I hope they forgive this big fail of mine... hmm, I think I'm watching too much Handmade's tale.

In this picture I tried to catch the environment of those famous pictures of  Rommel's 7th Panzer Division columns near Abbeville. The vehicles are MiniGeneral 3d prints but 42 of the 48 crew are my own Frankenstein type of convertions from soft plastic figures. 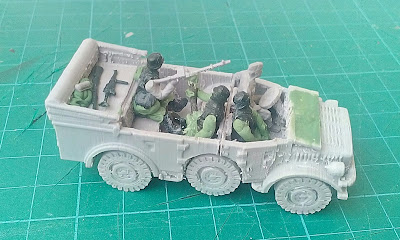 The vehicles are just great. A bit difficult to clean as you need to get used to this material but in the end you get a very good model, sturdy, 8 parts only (6 are the separate wheels) and with good detail. A true wargames friendly model.

Sometimes I read very unfair critics to 3d prints and even to MiniGeneral, which in my opinion ranks among the best of them. They are related to the printing lines that still exist and to the difficulties in cleaning the extra plastic. Regarding the first you can use some special primers that deal with most of the problem, even if this problem is getting solved with the advances of priting technology (which I have no idea of what it is). On the issue of extra plastic, sorry my friends but if you don't have the patience to clean it with some good pliers and a fine X-Acto you better use resin or metal that cost 2 or 3 times more and I also hope you are rich enough and live long enough if you want to build big units for our beloved RF! Finally the 3d prints from Minigeneral, or BPM models don't lie to you. They are clear on the pictures they show on their websites about what you are getting. They are pictures of samples coming fresh from the printers sometimes with only a quick cleaning and showing the actual product. If you like them go for them, if you don't there are other options.

The figures in this Horch 108 are built from Esci torsos and a Revell driver from the German artillery set. The arm and MG34 came from spare Zvezda parts of the BMW combo. Then the trick started with GreenStuff  arms and legs. In the end the original boots were glued to the GreenStuff legs while the last ones were still drying. 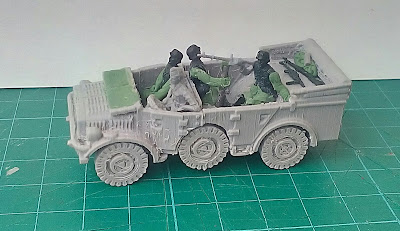 In the same vehicle you can see a third small part of the original figures that were put to use, the Kar98 and the MP40's you see in the back of most of the models. 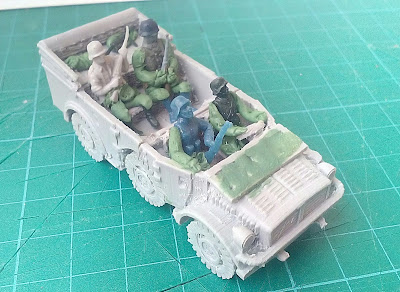 In this other Horch you can see torsos from DAK Airfix, Matchbox, Atlantic and Esci all happily sharing the same Uber. 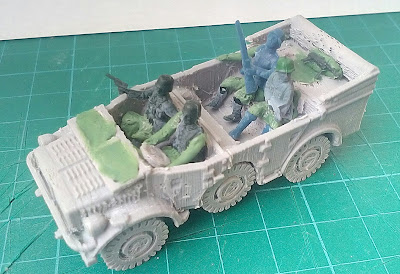 Again more Esci, Atlantic and Matchbox in a different Horch. 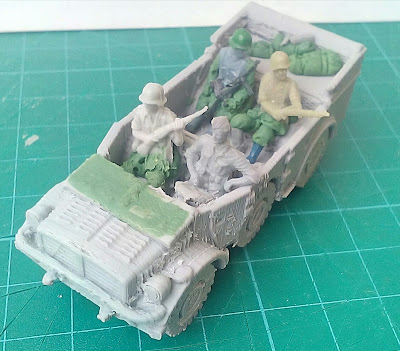 Two DAK figures from Airfix and Esci entered this one and suit nicely the 1940 campaign. 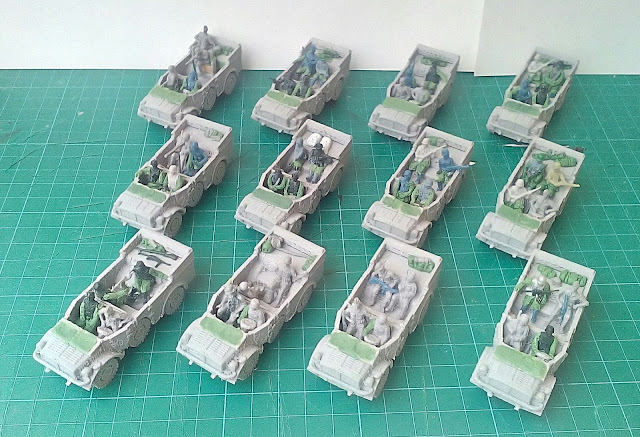 Here you have the lot ready to be primed and based. The windshields were also covered with GreenStuff to simulate canvas covers as used in the 1940 campaign by most of the vehicles closer to action. 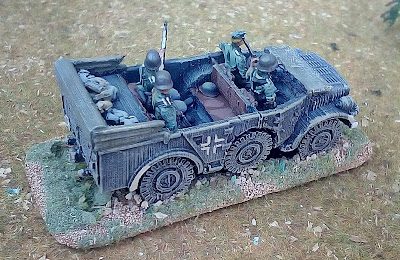 The painting of the Horch cars was plain Panzer Grey as most of the soft skin vehicles didn't receive the brown camouflage colour. 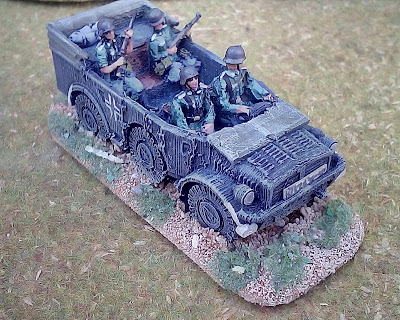 Apart from the side crosses some visibility white was applied in the exposed corners of the cars and a card licence plate was added to the front. 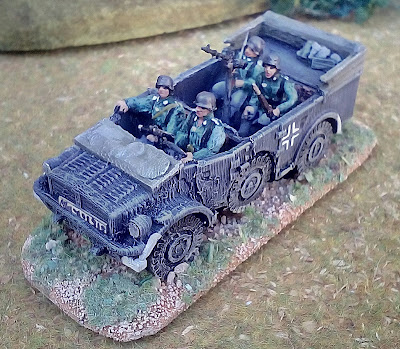 Another Zvezda MG34 was added to this Horch this time without the arm that holds it. On the back seat you can see one Hasegawa hard plastic figure from their Sdkfz 7. All others are my own conversions from Esci, Airfix and Atlantic. 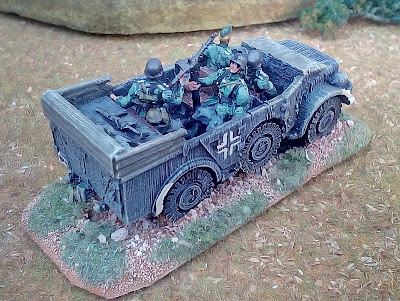 Here you have again the first model showned already painted. The result of the mix of these MiniGeneral 3d prints and these converted figures is quite pleasing. With far less money spent then if using resin or metal (or even plastic kits) you can have a large group of decent models enlarging your collection. 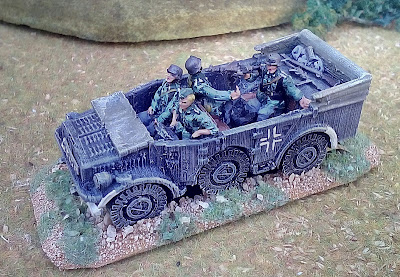 Another view of the same. 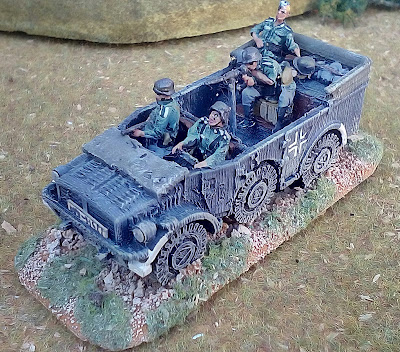 In this one you have a Revell NCO with a MP40, an Atlantic driver and a Revell artillery seated figure. The MG34 firer had his left leg torn apart and replaced in a seated position even if he looks as just having given birth to triplets! 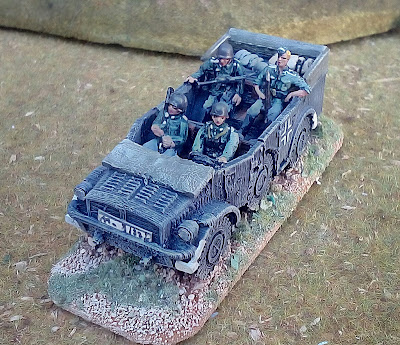 Another happy family from Hasegawa, Esci and Revell riding along the Somme valley in that hot spring of 1940... 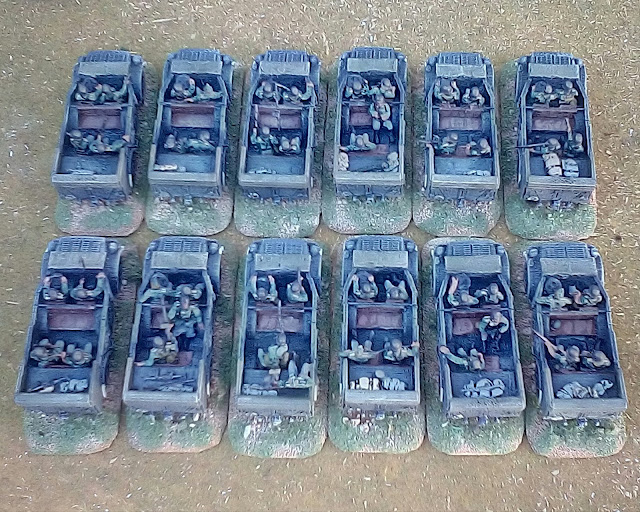 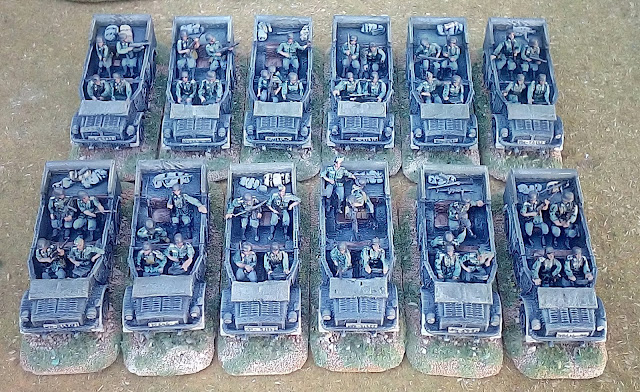 With 6 more to go the 7th Motor Rifle Regiment is nearing completion.

Posted by João Pedro Peixoto at 12:53