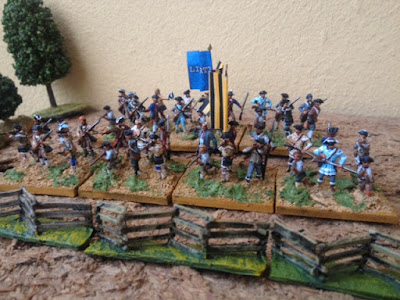 A few days ago I saw 'The Patriot' once more. And once more I got sad for being the more commercially available movie to inspire AWI buffs. It's filled with mistakes and even with the South African comedian Trevor Noah joking and saying a lot of truths about British colonialism (and Portuguese if you also want), the XVIII century englisman didn't deserve to be treated like Nazis. That 'Tavington' (the historical Tarleton) is incredibly mistreated and the whole political aspects of the movie should have been heavily criticized. In fact the British were some of the few to show respects for the Indians with the Proclamation act of 1763 something the future Americans were quick to ignore and started one of the most shameful pages in history with the destruction of the Indians. That would be a hell of a story for Hollywood!!
Then the details are also awful with British with yellow or blue cuffs with Green flags and so forth. Also no Grenadiers anywhere. And there are some great reenactemnent group in the US that would be eager to help for sure. 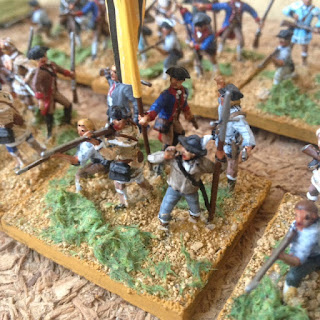 But the Camden battle scene is well achieved and you can see  some milita well portrayed. So militia for Brandywine followed. These figures  represent  one of the two brigades of Pennsylvania  militia present on that battle. Seven stands total to represent James Irvine Brigade. 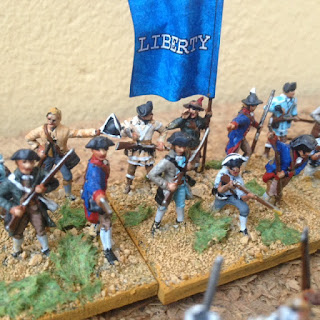 Almost all figures got a new hat, otherwise you would have plenty of bold men and plenty of caps all over that Revell offers. Many of them are with the popular hunting shirt while others have some part of their old uniform for having been conscripts in the Continental line. 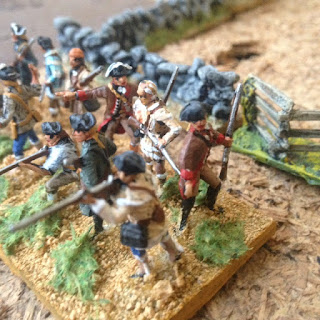 Some of the figures got transformed so they can look as if they are panicking an idea I took from the excellent 28mm Perry  used in 'Tarleton Quarters' blog, probably the best one if you want to see AWI figures. In fact you have an almost encyclopedia of uniforms there and also many of the Brandywine units.

- Stay in the line! Look at this oldie by your side facing the enemy!
- That's 'cause his legs can't move no more. I'm leavin'.

Posted by João Pedro Peixoto at 05:31