This regiment is made almost entirely from figures out of the Revell 7WY Austrian infantry box. The poses are quite "regular" and I think they suit the British nicely. The figure biting the cartridge is one of the best ever! The cuffs are a bit too large for 1777 British infantry but the figures represent well most of the armies of the period.


The pioneer on the second row has its mitre cap enlarged with GreenStuff and the drummer is from G.Washington Airfix box with a grenadier head. The officer  is from the  Revell 7YW artillery box. There is also one Airfix kneeling firer per stand. 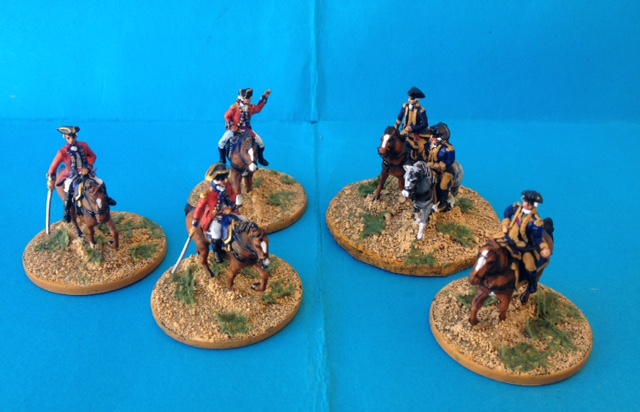 The officers are again a mix pot you can probably recognize from Airfix, Revell and Imex. The British officer from Airfix has a body from the infantry box and a grenadier head. The bigger base represent G. Washington itself while all others are Brigade commanders.


The Divisional commanders will have an officer on horse and another on foot.