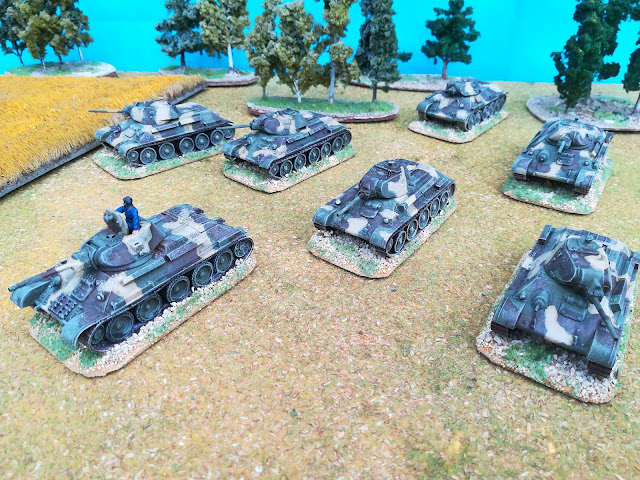 Don't know what to do with the excess of T-34 you have?
Need T-34 for the very beginning of the war?
Want to know if Sporting CP will win the Portuguese cup?


We here at jpwargaming place have all those answers! And you don't even need to pay a single Euro as they are asking at Wikipedia...

I already have around 50 built and painted T-34 for the mid-war centered around several Corps for the Kursk campaign. Around half are have the hexagonal turret from late 1942 but others are the 1941 and 1942 models that were still around in 1943. From this last group I had a few in excess given to me by JMM and JF who in the last few years turned to strange scales and sizes like 28mm, 15mm and 10mm and even stranger rule sets like Battlegroup. Pfff... who does that after wargaming in 20mm and trying Rapid Fire? No one! At least that I know of.

The good thing of their choice was that a large number of models fell into in my hands and quite useful they are! 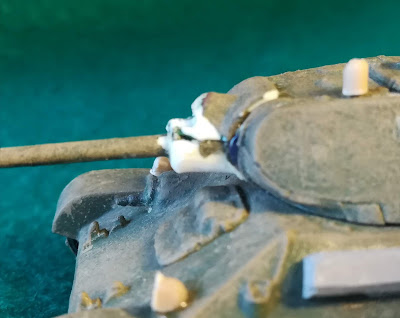 The idea was to convert six of the T-34 model 1941 into the 1940 model with the distinctive L11 76,2mm gun. This in fact is the main change, plus adding another periscope in the turret and rearranging tools and boxes in the hull.
This can be done by carving the old F-34 gun into the shape of the L11 and drilling a new hole for the
gun tube. The rest is to glue two new headlights to the front, new periscopes on the turret and gluing new tool boxes in the sides of the  hull. Don't forget that no extra petrol drums were carried in this early version. 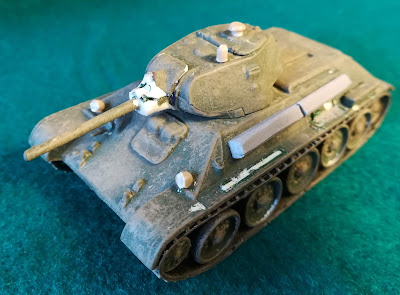 Before painting they look like this. I used four Matchbox and two Esci models for these conversions. 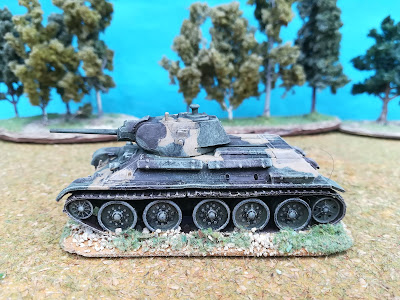 Of course one of the main atractions of this early version is the possibility of using the early Soviet tank camouflage consisting in this case of 4BO (green), 6K (Brown) and 7K (light Khaki). 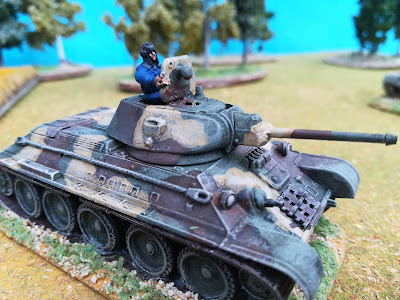 One of the Esci models became the unit commander's tank. I used the Esci figure but modelled new arms in GreenStuff for them to adjust correctly to its position. 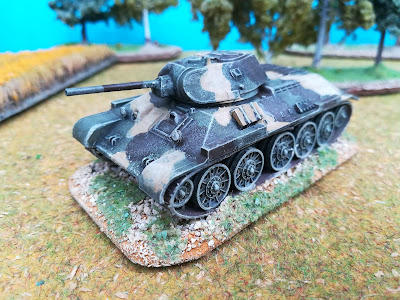 The seventh model is a standard 1941 T-34 from Nitto/Fujimi. The mantlet is too small to try the conversion and the model was just repainted. In fact less than half of the 900+ T-34 fleet that the Germans found from the second day of the invasion was the 1940 model, the rest being the 1941 model with this distinctive and more famous F-34 gun
Next: Most probably more BEF 1940 stuff.
Posted by João Pedro Peixoto at 01:57