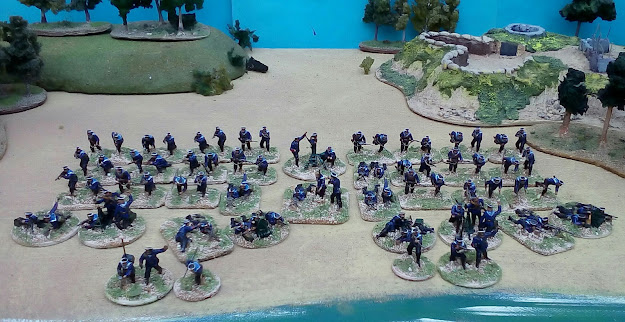 This post almost finishes the Soviet part of the battle. It regards the two Naval infantry battalions that landed at South Ozereika. The figures are Pegasus which are very detailed and need some building. The box has figures with PPSH-41 sub-machine guns, Mossin Nagant and SVT rifles and even the small 50mm mortar is there. The problem is the absence of heavier weapons so a few Esci conversions were necessary. Still missing are a few Jeeps, one AA HMG, two 45mm AT guns and a 76,2mm infantry gun and respective crews for the Brigade HQ. I`ll go Zvezda for the missing guns so that everything can be Russian!

The Russian Naval infantry company. The figures are all in the same uniform in order to speed up painting. In fact the Naval Infantry had a mixture of several pieces of the Naval and infantry uniforms. Many had infantry helmets, ushankas and telogreika jackets (more than probable for this battle as it was fought in February) but never left aside their elnyaskha shirts famous for their horizontal blue and white stripes, 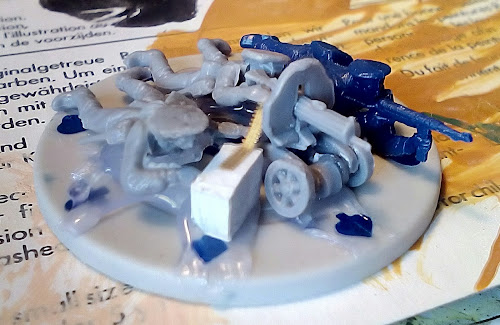 Regarding the support weapons, like this Maxim HMG,  a few Esci infantry had their helmets brim cut off and squashed after heating with a lighter. The idea was to produce the Soviet Naval cap, the eskozirka, that comes along the Pegasus figures. The ammo belt is a ExtraTech photo etched part. 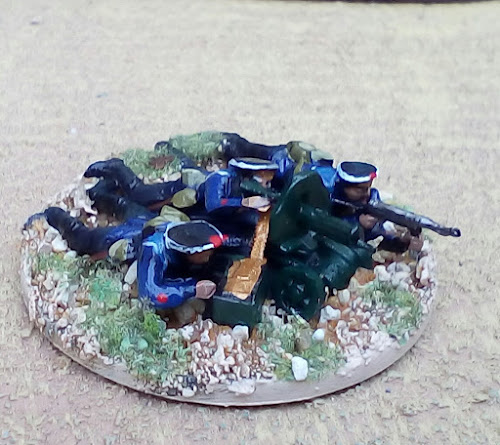 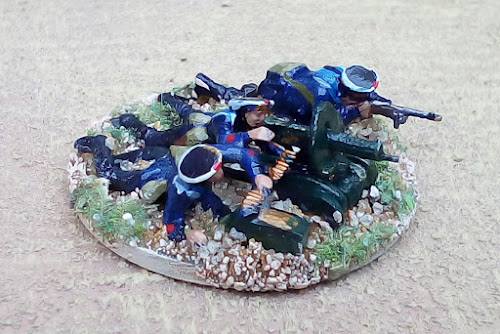 This is another Maxim HMG stand. After painting the Esci based figures became some reasonable sailors. 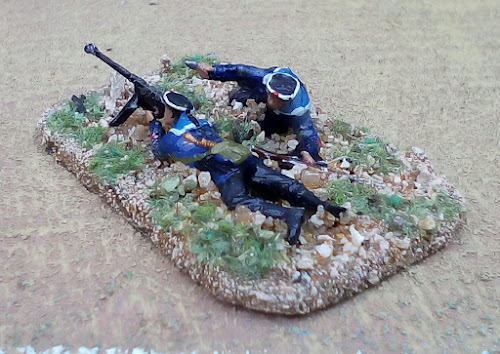 The PTRS-41 A/T rifle is replacing the original Mossin Nagant rifle. The ammo supplier comes from the 50mm stand. 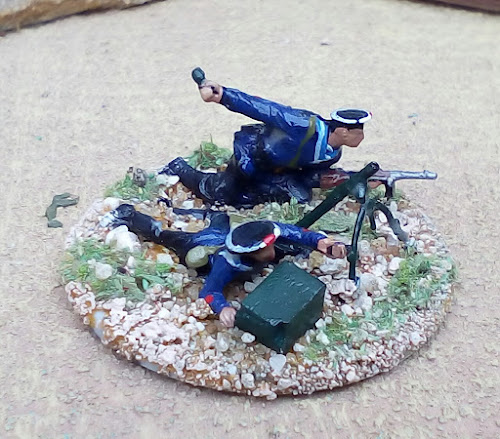 This 50mm mortar team is one more Esci/Pegasus mix. 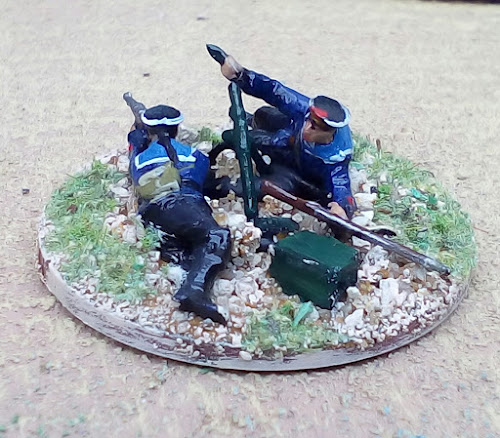 The other 50mm team has the original Pegasus group. 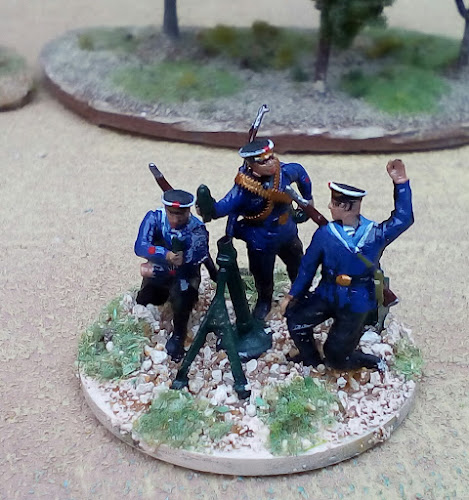 The 81mm mortar team has an Esci conversion ammo supplier with ExtraTech ammo belt. The 81mm mortar was slighly shortened as its too long. The figure from the right, ordering to fire, is in fact one of the dead figures of the Pegasus box. I heated the legs for the figure to bend the knees but he still looks  like dancing the Kalinka! 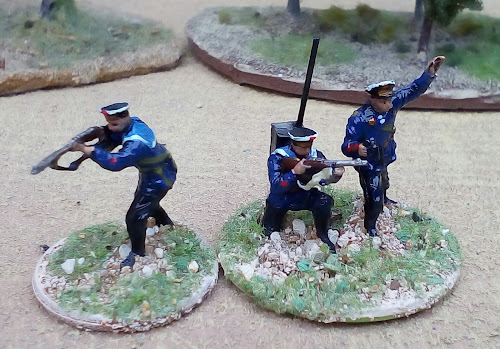 The command group has a converted radioman firing the PPSh-41. 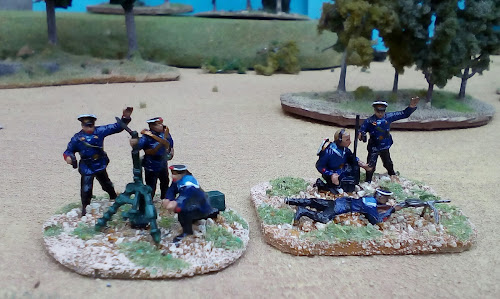 These are Brigade stands. To the left is the 120mm mortar with a bipod from Atlantic in the normal Esci tube; to the right the radioman is a converted Aifix British paratrooper. 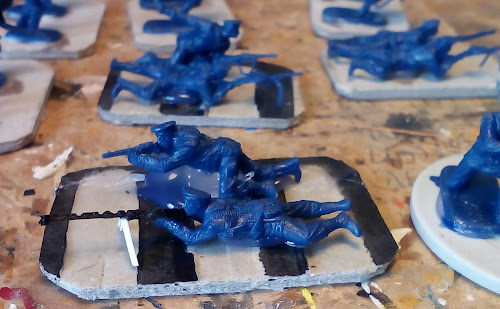 The original plastic stands for the laying down figures were replaced with blobs of glue gun. The PTRS-41 is the MiniGeneral 3d print of the Boys rifle with a few cuts. 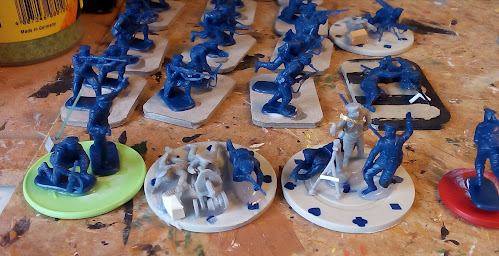 This Pegasus box shows figures all in the same environment, running and under fire, which makes them ideal to leave my homemade MO4´s. You can see some converted Esci figure with the ExtraTech ammo belts, a typical characteristic of Soviety Naval infantry. 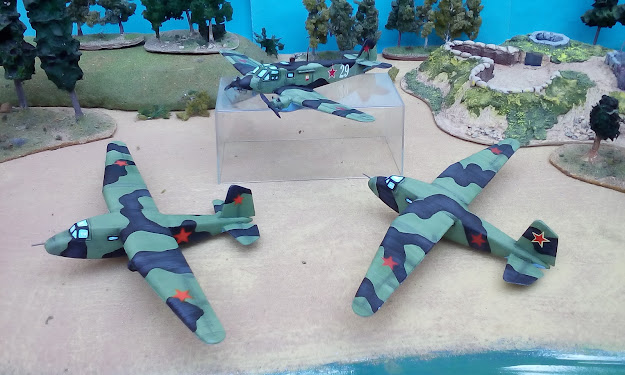 Also a few aircraft were built in these days for a What-if of a Glider attack at Ozereika or for any other mission. The Gliders are the G-11 Gribovski from NTI and the YAK-6 is Encore.
Next: the 1QVR in France 1940.
Posted by João Pedro Peixoto at 17:14