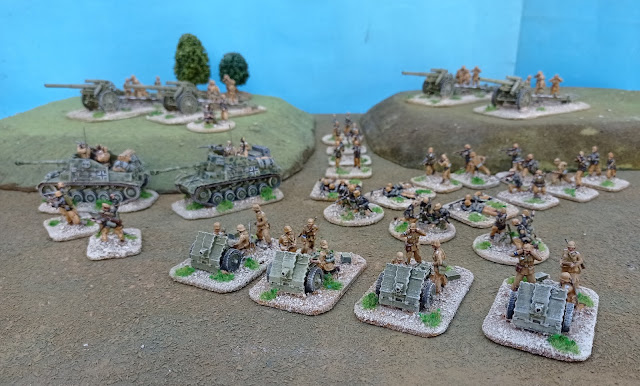 On the heights of Gela, right on top of the twin mountains of Monica Belluchi, the II and III artillery battalions of the LFD Herman Göring artillery regiment prepare to support the attack of the mobile forces. Also close by some IG75mm lend some hitting power to the attack. 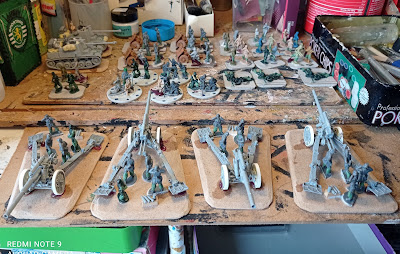 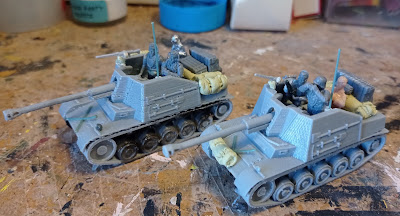 The Marder II (PzII chassis) were part of the AT assets of both PzGrenadier regiments. These models are MiniGeneral 3d PLA prints. 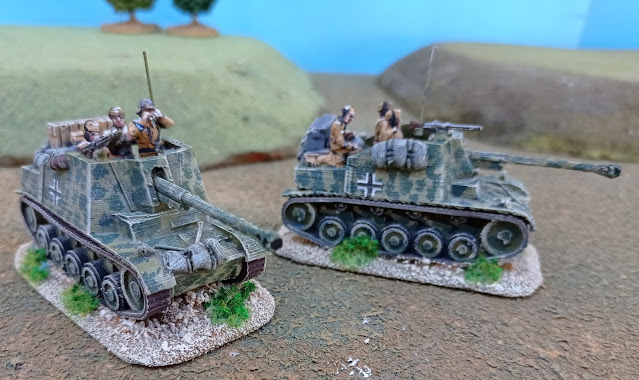 The crew came from PSC, Simon Soldiers and Esci. 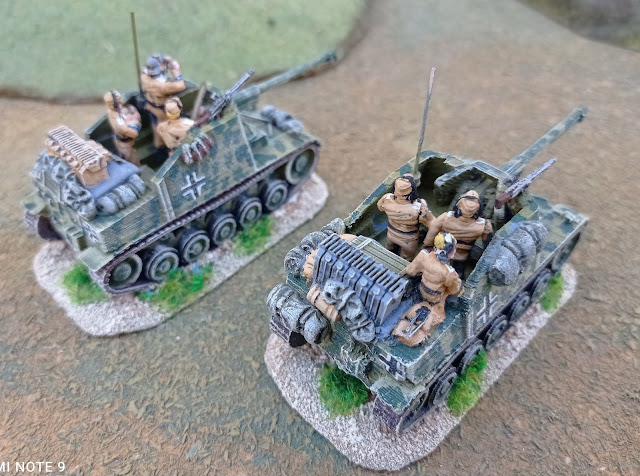 Plenty of stowage had to be added as these MiniGeneral prints are already a bit old and the printing lines are visible even after spraying several coats of varnish. But dimensions are very good and a nice result can be achieved with some patience. 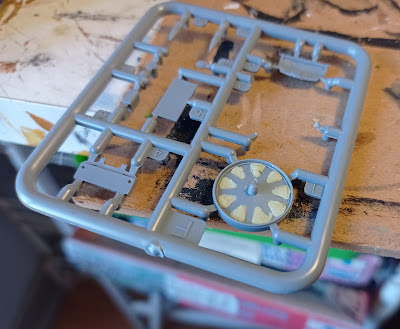 Now for the First To Fight 15cm sFH 18. They are the horse towed version (the only ones FtF released up to now) and some work had to be dedicated to turn it into the Hanomag towed version. That passed into filling with Milliput the holes of the wheels with that were drilled after drying. 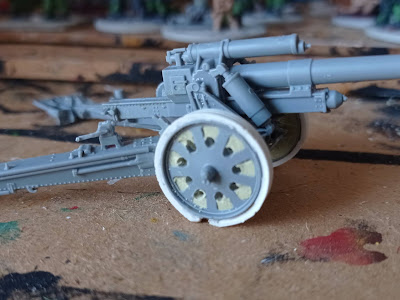 Then some cut out pieces of Evergreen plastic card were rolled around each wheel for it to look like a rubber tire. 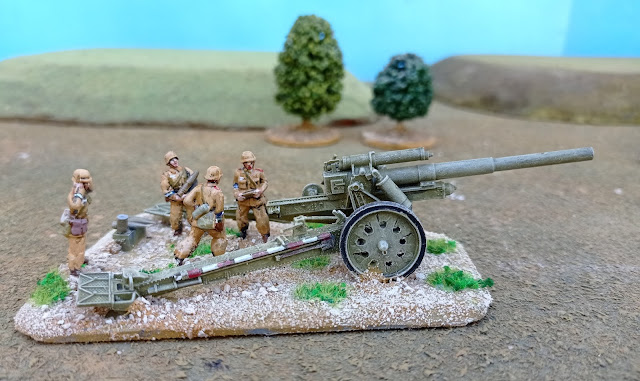 In the end the result is ok (ok if you discount the fact that the vehicle towed wheels only had 8 holes instead of 9, but that is a secret between you and me). 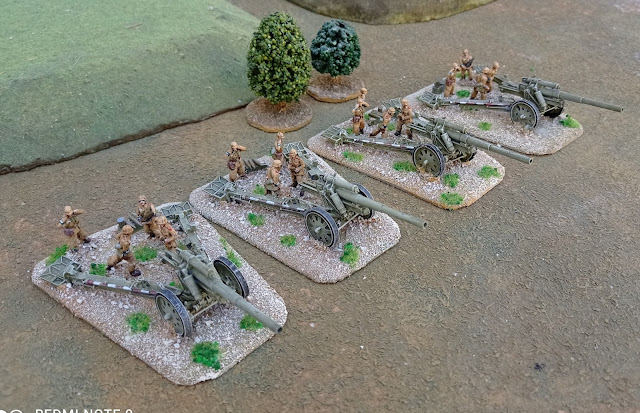 The artillery crews are also FtF with a few converted Esci in the middle. All of them had baggier trousers added with GreenStuff. 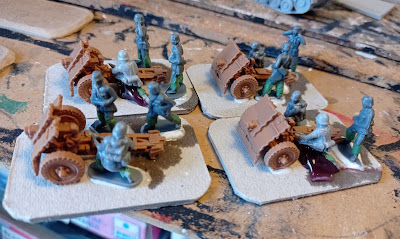 The IG18s are MiniGeneral with FtF, PSC and Hasegawa crews. 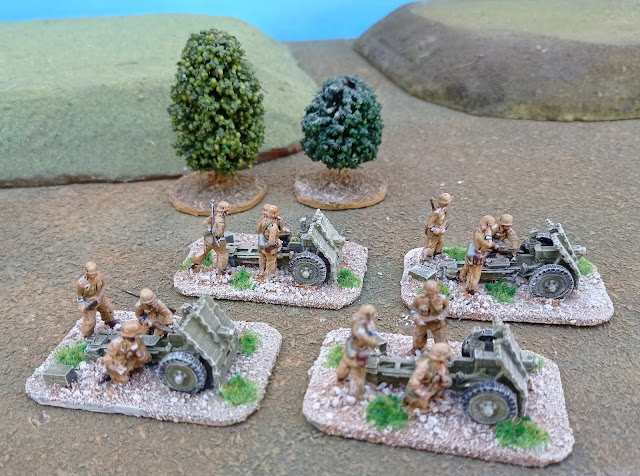 Both crews of the 15cm sFH and 75mm IG18 have painting schemes (no SS camouflaged smocks) that allows them to blend with the Afrika Korps as all these models were still absent in the mighty DAK. They have some particular insignia of the HG division as the cuff titles but they are too small to be seen from 1 meter distance.

The infantry is coming from all sorts of plastic brands as usual - Airfix, Esci, Atlantic, Revell, Matchbox, FtF -  and all of them got baggier trousers with the help of GreenStuff.

The Esci MG34 firers got a bipod for them to rest their tired arms. They were in this position for 30 years or so which must have not been easy!

An HG infantry company with many brands mixed in. 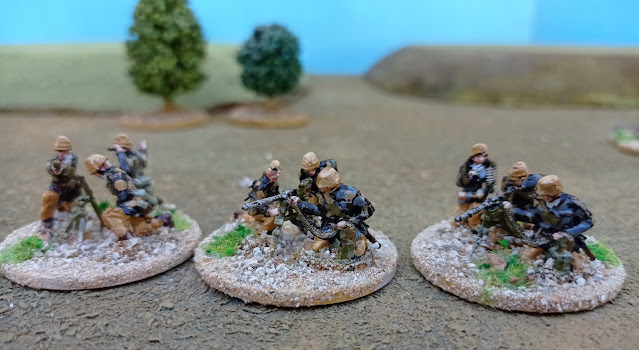 The heavy weapons company is a full FtF company with a few Revell and Esci figures in the MG34 stands. 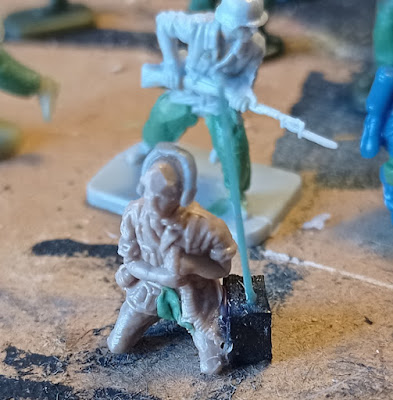 The radio man is a conversion from the tripod MG34 firer of the DAK Revell. 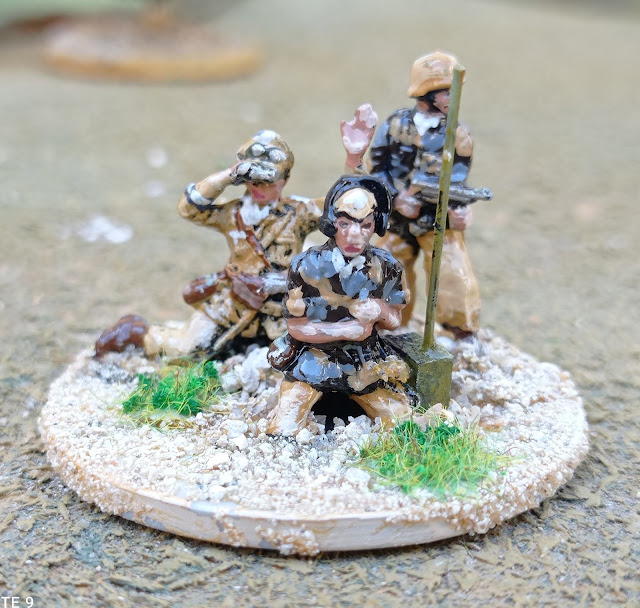 Also the officer is the famous Airfix DAK officer with legs from Revell. 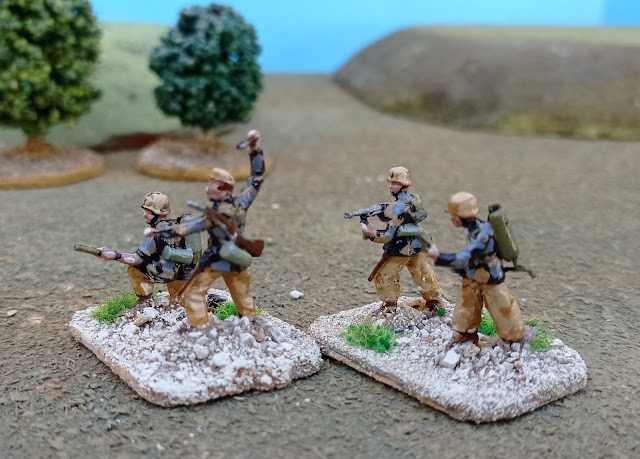 A few more stands for the engineers of the HG. Airfix and Esci figures.
Like this I can consider the Luftwaffe Panzer Division Herman Göring for Sicily complete. In the last few months I added the PzIII M, infantry, some missing Stug, Marder II and artillery to a list of vehicles that were not collected thinking of this big unit particularly, like Pz IV Gs, 251Cs, 105 lFH, etc that will have to fit in order not to make another long list of models just because of minor details.
What I think is essential to portray the LFD HG is the PzGrenadier infantry, due to their SS smocks mixed with other desert pieces of uniform and equipment and the battalion of PzIII M, due to the absent chassis skirts. All the rest can be and will be recruited from other fronts, namely the Western Desert and even Normandy, which is the place from where my PzIVs, Hanomags, Opel Blitz and Bisons will come just to name a few.
Next: probably more Italians for the desert.
Posted by João Pedro Peixoto at 13:21