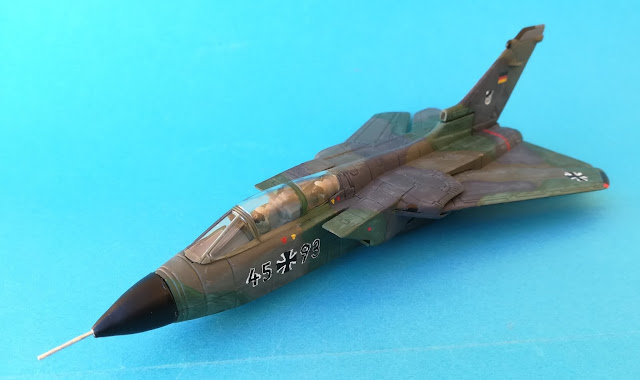 A few years ago a brand of 1/72nd scale airplanes showed up in supermarkets and alike. Its name is New-Ray and had a number of diecast models like the Tornado, Mig-15, Mig-29, F-16, Thunderjet all in our favourite 1/72 scale.

They were funny to put together as they had some screws and even a small screwdriver inside the box to attach the few parts necessary. Pilots were very ugly and you need to take the canopy out, paint them and place the canopy back in place.

A New-Ray Mig-29 is already with my Iraqi airforce and I also bought this Tornado thinking it would end with British or Saudi colours. But then my big creation came ('2008' I mean) and the model ended in German colours. The original painting is also not very good so the model was painted again. The colours are from the 80's but saw service up to 2012. I used as greens both Vallejo German WW II uniform and Citadel Waaagh Flesh (a nice colour with a stupid name) and the grey is Vallejo Panzer Grey 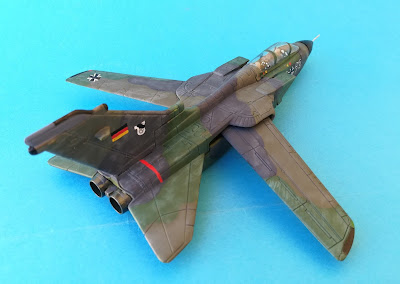 While mounting the plane you can place the wings with variable geometry.

I hand painted all symbols and only added a metal air data receiver to the nose after drilling it. 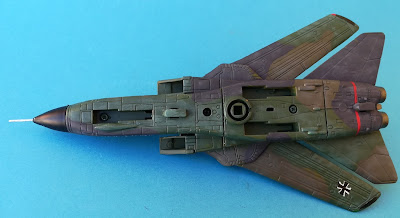 But at some 2 Euro each you could not expect the best model Tornado around! The wheels are always the same in all planes, no fuel depots, no bombs or missiles and in the end some holes to be seen (of couse you can cover them but no one looks at the under belly of a plane during wargames).

In the end  you can have some reasonable and cheap planes for some happy wargaming.

Next: Wether some T-64BV from ButlersPrintedModels, some first BrigMec tanks ('Hey, what is that? It looks tasty' you're asking for sure)  or some 10mm Chileans. Lets see what I can finish first.

Posted by João Pedro Peixoto at 07:33