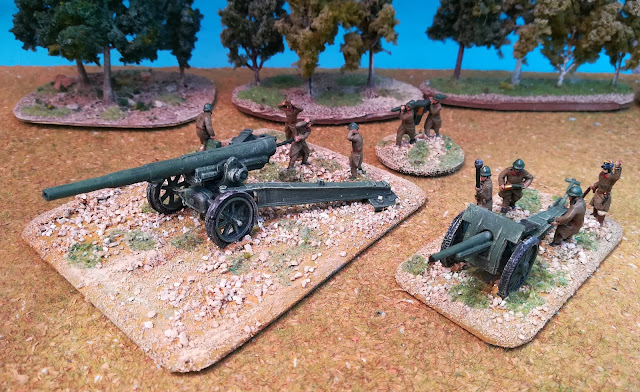 These two StrelestR guns and crew are designed for the WW1 but can be easily adapted for 1940. The main aspect is a new paint job on the crew. The two rows of buttons in the capote need somehow to be desguised - I did it with a thick coat of varnish - and a belt need to be painted in each figure. The officer has the capote buttoned infantry style, so he can be an infantry officer giving a hand to his fellow artillerymen. Its an excuse as good as any other.

The 155 GPF was built straight from the box but this Schneider 105mm has new wheels from the Hat artillery box. Initially intended for the Hat 75mm gun these wheels were historically also used in the Schneider 105mm guns of the DLM's and DCR's.

Next: The rest of the vehicles of the Dragoon regiment of the DLM.
Posted by João Pedro Peixoto at 11:47