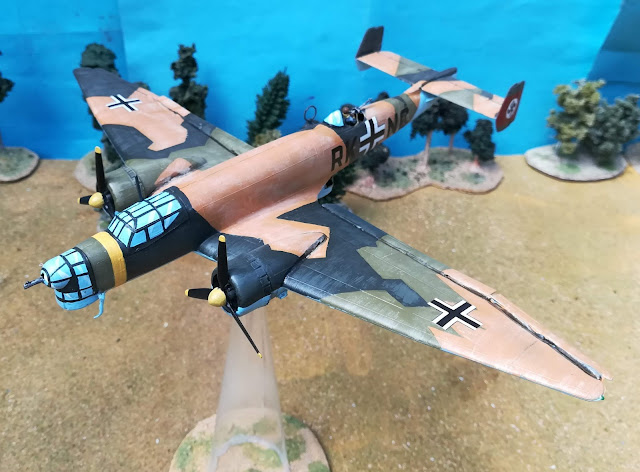 This Junkers bomber was initially to be used by the Nationalist side of the SCW but was diverted to the Polish campaign of 1939. It was a quick build that lasted only a few hours of the last two days. There are some tricks you can use for a fast build of a wargame aircraft or in fact any wargame model and still having a reasonable good looking model in the end. Remember: your kids will sell your stash most probably, so be quick on your models!
﻿ 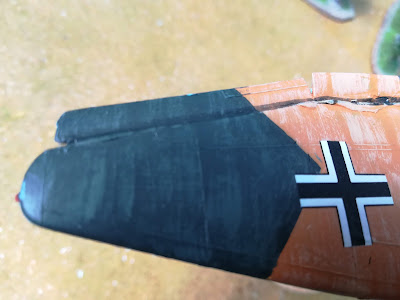 Everything starts at the beach by reading about our beloved issues and inspiring yourself.  Already at home the model was put together quickly, the propeller parts and exterior figures all glued and some joints strenghtened with super glue.

The ailerons on the wings were glued with a hot glue pistol. There is some seams you can see but you avoid a painful process of using the tiny gluable parts inserted in the ailerons and designed to be glued to the under parts of the wings. Also like this the model gets extra strenght in that fragile area.

The aircraft was fully primed, figures and all and the camouflage was hand painted. No security tape no nothing, just do it with a firm hand. Ten minutes later, the first darker acrylic layer dryed. Apply a bit of diluted black in the most obvious recesses. With a bit of paper try to drain all excess of diluted black and the lighter tones were applied some 15 minutes later. 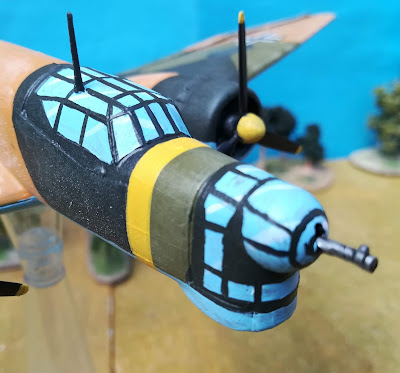 No interior parts whatsoever. The transparent parts are simply painted and that avoid one of the most time consuming procedures in building an aircraft. The front MG13 was replaced by a thicker piece of plastic as the original one wouldn't last for long. 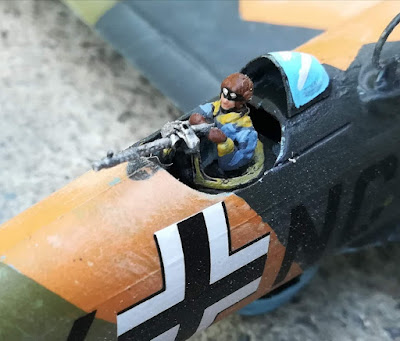 Some care was placed in the details of the two exposed MG13 firers,one seen here and the other in the under belly of the fuselage. This figure had its legs burned with a lighter until a ball of melting plastic was formed. Like this you can sit the figure in the position you want. The same happened to the arms that now are grabbing correctly the weapon instead of practicing martial arts. The decals sit in  a layer of acrylic gloss varnish. After placing the decals they were again covered with the same varnish. In the end two coats of acrylic varnish spray were applied, one gloss and another matt and its done.

In the last two days, I spent most of the day out and only used maybe some 6-7 hours of these two days in building and painting this aircraft.

You are thinking 'Sure, this guy has no wife or kids to deal with and most probably is retired'. Wrong. I drive 60 km for my working place and  have a wife and two kids. Well, one is 19 YO but the other one is 2YO! Besides, finding a wife that understands your hobby and do most of the house stuff is also important.

But most important than everything is making a compromise between an elaborate model and one that when quickly finished really helped you reducing your stash (my wife calls it 'colesterol') before the mailman rings. Again.


Next: Blitzkrieg refugees.
Posted by João Pedro Peixoto at 16:28